More than 400 people packed a rally and fundraiser for mayoral candidate Mary Norwood in Midtown Wednesday, a sign that her courting of gay and lesbian votes is working.

Norwood mingled with the large crowd before delivering a campaign stump speech that touted her support for gay marriage and repeated her pledge that police raids of bars during her administration wouldn’t happen without her approval. That was a clear reference to the Sept. 10 raid of the Eagle by the Atlanta Police Department in which eight people were arrested. She was introduced by her lesbian step-daughter, Dorsey Norwood. 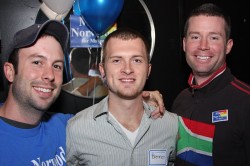 Norwood and Kasim Reed are locked in a pitched battle for gay votes as they head to the Dec. 1 runoff. The campaign has caused a split among LGBT voters, mostly over the issue of marriage equality. Norwood supports gay marriage while Reed stops at backing civil unions. On other key gay issues, the positions of the candidates are similar.

Also on Wednesday, Norwood received the endorsement of GLBTATL, a grassroots group that says she “has the drive and ability to effect meaningful change at City Hall.”

Mary Norwood has been an outspoken advocate of equality for all citizens, in every part of life. She has pledged not only to push for City policies and ordinances that support equal rights at the City level, but also to use the Mayor’s office wisely as a voice for our community to State and Federal legislators.