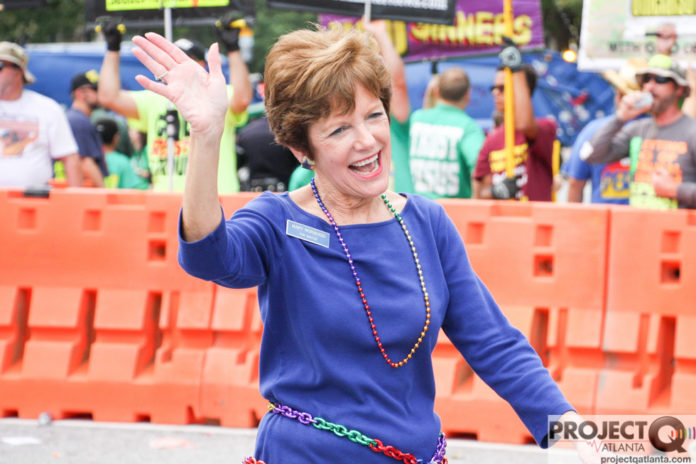 Mary Norwood wants to be Atlanta’s next mayor. The seemingly indefatigable City Council member is running a second time, buoyed by what she describes as a groundswell of support from a diverse coalition that includes LGBT people, black voters, Republicans, Democrats and Independents.

It’s working. Norwood has consistently placed first in poll after poll of voters.

“It was a groundswell of support that was across every part of the city, every demographic,” Norwood said on the latest episode of Podcast Q. “And yet at the end of the day I said to my husband if I don’t do this, if I don’t try to be the mayor and I just give this a pass, I am not going to like me in five years and a whole lot of Atlantans aren’t gonna like me in five years because they will say you came so close in 2009. Why weren’t you an option for us? Why weren’t you a choice for us?”

Over several terms on City Council and her first run for mayor eight years ago, Norwood has carved out a loyal base of LGBT supporters. It doesn’t hurt that Norwood will hug drag queens, shake hands in gay bars and attend LGBT rallies and marches.

But during our interview, Norwood also discussed LGBT issues, how Atlanta can better address HIV and what’s left to do in a city that consistently receives perfect scores from HRC’s Municipal Equality Index.

On the new episode, Norwood also talked about working with LGBT civic activists in the 1980s, the Atlanta Police Department and policing a diverse city, the Beltline, affordable housing, gentrification and how she’ll work collaboratively.

“That’s the way I will run the city,” Norwood said.