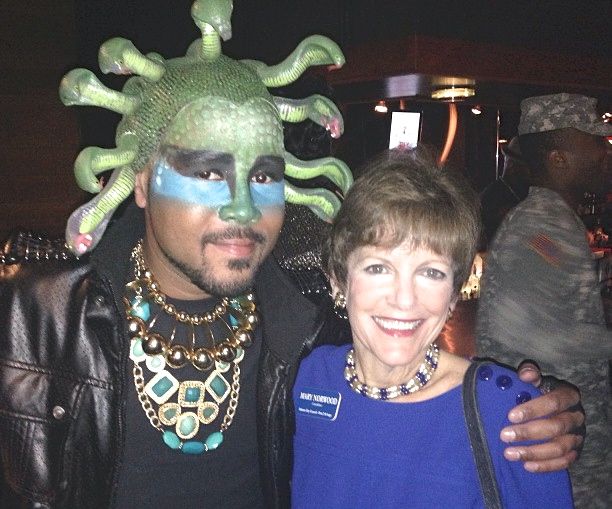 Drag queen hugging Mary Norwood took her City Council campaign on tour Thursday, stopping by a Halloween celebration at one gay Atlanta bar and then dropping in at another to help judge its costume contest.

So much for those “Republican Values” she's been tagged with by state Democrats in an increasingly hostile race as she tries to unseat gay-friendly City Council member Aaron Watson for the Post 2 At-Large seat she once held. The election is Tuesday.

Norwood's first gay stop on Thursday: Bulldogs, where she posed for photos with costume-clad cocktailers (top photo). Then it was on to Blake's for a packed house, a costume contest and some face time with Nicole Paige Brooks.

Norwood isn't shy about diving in for LGBT support. She took part in the Atlanta Pride parade on Oct. 13. She's packed a gay bar with supporters for a fundraiser. And she's done the gay beer bust and pool party, too. Blake's isn't shy about Halloween, either. The bar did it big with costumes and queens on Saturday.

At Bulldogs and now off to Blake's where I'll be one of the judges for the Costume Contest https://t.co/o3vkckpjcJ