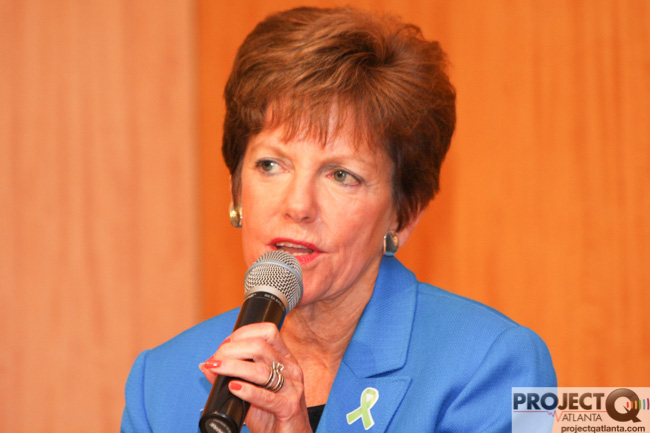 Mary Norwood – a City Council member who is leading the Atlanta mayoral race – said she is “dismayed” that Atlanta police ordered the closing of two gay bars during Black Gay Pride, but agreed with police that the action wasn't a case of discrimination.

Norwood also said that such a mistake wouldn't happen under her watch at City Hall. The candidate, who enjoys considerable LGBT support, issued a statement about the incident on Wednesday after speaking with police Chief Erika Shields.

“I am quite dismayed that this error in judgment and miscommunication occurred at all,” Norwood said. “Procedures are in place that should have prevented any such mistake on the part of an experienced APD zone commander. In a Norwood Administration no similar oversight will be allowed to recur. “

Atlanta police ordered Blake's, Ten, G's and 10th & Piedmont to close about 12:30 a.m. on Monday – some two hours ahead of closing time – as officers showed up in force to the intersection of 10th Street and Piedmont Avenue. That's where hundreds of Black Gay Pride participants were enjoying nightlife options after the day-long Pure Heat Community Festival in Piedmont Park.

“The bars came to the attention of the morning watch commander – an openly gay male – because crowds in the area were spilling out onto the streets, causing potential public safety hazards. Any notion the bars were targeted because of their clientele is unfortunate and simply not true,” said Carlos Campos, an Atlanta police spokesperson.

Norwood said she accepted Shields' explanation that the bar closings were a mistake and not the result of police targeting the crowd based on race or sexual orientation. Shields was promoted to chief in December and later came out as a lesbian.

Norwood's full statement about the incident:

In response to my telephone call to Chief Erika Shields, I received a detailed explanation and an apology for the incident. Chief Shields said in part, “…Any notion the bars were targeted because of their clientele is unfortunate and simply not true …” I accept the Chief’s explanation as to what clearly was wrongful action based upon communication failure.” That being said, given the APD’s reassessment of standard operating procedures in the wake of the 2009 Atlanta Eagle gay bar incident, I am quite dismayed that this error in judgment and miscommunication occurred at all. Procedures are in place that should have prevented any such mistake on the part of an APD watch commander. In a Norwood Administration no similar oversight will be allowed to recur.

On Tuesday, Cathy Woolard – the first openly LGBT person elected to office in Georgia and a candidate for mayor – called the closures of the bars “deeply disturbing,” “problematic” and a “debacle.” She also suggested the incident was spurred by discrimination.

City Council member Alex Wan, the only openly LGBT member of the council, called the incident “disappointing” and said he's working with Atlanta police to prevent it from happening again. Wan's District 6 includes a portion of the Midtown intersection where the incident took place.