Mary Norwood defends photo of her with anti-LGBT official 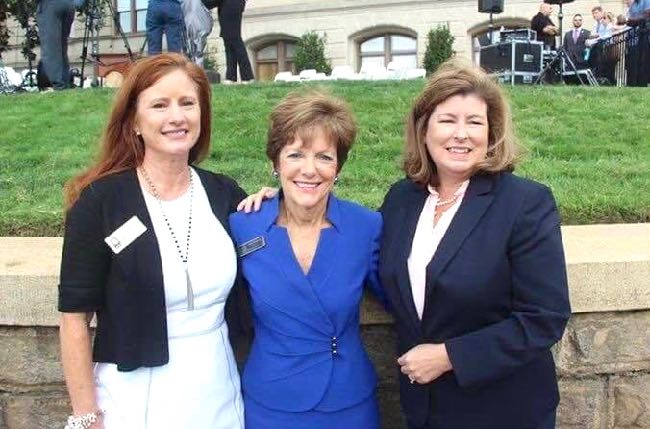 Mary Norwood – the leading candidate in a crowded race for Atlanta mayor – said LGBT voters should not be concerned that she appeared recently in photos with Republican elected officials, including one who has fought LGBT equality and disparaged gay families.

Norwood was criticized in Facebook posts on Tuesday after photos of her posing with U.S. Rep. Karen Handel, Fulton County Commissioner Liz Hausmann and state Rep. Beth Beskin surfaced on social media. The pictures were taken Monday during the unveiling of the Martin Luther King Jr. statue at the State Capitol.

“They should not be concerned,” Norwood said of LGBT residents. “I have been very strong in my views.”

Norwood, a member of the Atlanta City Council, has long been a supporter of LGBT equality and has appeared at scores of LGBT events and vigils, rallied against the state's gay marriage ban, and participated in the Atlanta Pride parade. But the photo of her embracing Handel upset some LGBT people.

Handel won a metro Atlanta Congressional seat in June during a bruising battle against Democrat Jon Ossoff in the most expensive House race in U.S. history. Handel – a former Fulton County commission chair and Georgia Secretary of State – became the first Republican woman elected to the U.S. House in Georgia.

In the closing days of the campaign, Handel doubled-down on her anti-LGBT views. In statewide campaigns in 2006, 2010 and 2014, Handel went on anti-gay benders and disavowed her LGBT-friendly positions of the past. Her worst moments came in 2010 when she blasted civil unions, same-sex marriage and even agreed that adoptions by gay people should be banned. Four years later, she went as far as suggesting that being gay is a choice.

In June, Handel scoffed at Rep. Park Cannon, one of four LGBTQ state lawmakers, when Cannon tried to introduce herself and offer help on equality issues. Days before the election, Handel drew a red line on adoptions by LGBT people and made it clear her position on the issue is the same as it was in 2010.

In 2016, Beskin – a Buckhead Republican – helped kill an amendment adding sexual orientation and gender identity to the Georgia Civil Rights in Public Accommodations Act. In 2015, Beskin voted to add LGBT protections to a “religious freedom” bill from state Sen. Josh McKoon after LGBT activists harshly criticized her for voting the bill out of a subcommittee.

Hausmann is a Republican who is vice chair of the Fulton County Commission and represents District 1, which includes large portions of North Fulton.

Norwood reacted quickly to criticism of the photo, adding comments to at least one comment thread that was harshly critical of her. The photos were posted to Norwood's mayoral campaign Facebook page, but the one with Handel and Hausmann was later removed. Norwood also took photos with several Democrats, including Atlanta City Council member Michael Julian Bond, Sen. Donzella James and Rep. Debra Bazemore.

Norwood said she arrived at the event on Monday about 45 minutes before it started and posed for pictures with several elected officials.

“With the photo that has been the point of conversation, I have already answered back that I was asked to do a picture with Beth Beskin and then Karen Handel came up and joined that picture,” Norwood said. “I am always respectful of all publicly elected officials.”

Norwood said her rapport with elected officials across both political parties will benefit the city if she's elected mayor.

“If I am the mayor, I will certainly want to work to get resources for Atlanta,” Norwood said. 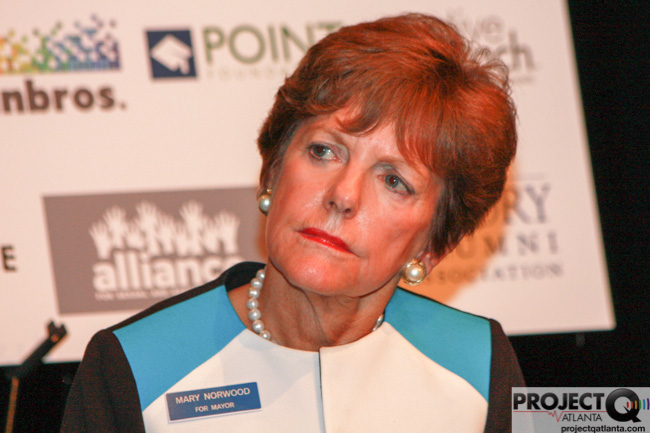 'My views have always been for LGBT rights'

A WSB poll released Monday shows that Norwood is maintaining her double-digit lead in the mayor's race. Some 25.4 percent of likely voters surveyed said they would pick Norwood. The nearest candidate, City Council member Keisha Lance Bottoms, had 12.4 percent.

The mayoral race is the second time Norwood has run for the top spot at Atlanta City Hall. In 2009, Norwood and Kasim Reed waged a pitched battle for LGBT support. Norwood placed first in the election but lost the mayor's race to Reed in a runoff. Both candidates had similar positions on LGBT issues, though Norwood supported same-sex marriage and Reed did not.

During that campaign, Norwood was criticized for accepting a campaign donation from Michael Bowers, a Republican who as the state's Attorney General from 1981 to 1997 fought gay civil rights all the way to the U.S. Supreme Court.

Norwood was also criticized for failing to vote for a measure expanding the city's domestic partner ordinance to allow gay city workers to make their partners pension beneficiaries. The measure passed unanimously in 2006, though Norwood didn't vote.

In 2003, Norwood voted in favor of the successful effort to close bars earlier, shifting last call from 4 a.m. to 2:30 a.m. – a move that some LGBT people still criticize today as the start of a decline in gay nightlife. In her 2009 mayoral bid, Norwood backed returning to a 4 a.m. last call with several qualifications though the issue never gained traction at City Hall.

Norwood also raised concerns among some LGBT voters when in 2010 she launched her campaign for chair of the Fulton County Commission during a GOP event in north Fulton.

In 2013, the Georgia Democratic Party blasted Norwood and her “Republican Values” as she attempted her successful return to the Atlanta City Council. Norwood again ran as one of the most pro-gay candidates in any city race.

In 2016, Norwood co-sponsored a City Council resolution condemning an anti-LGBT “religious freedom” bill by state lawmakers as a threat to the city. The measure called on state lawmakers and Gov. Nathan Deal to defeat the bill.

“I join Governor Nathan Deal, businesses all across Georgia, the LGBT Community and all Georgians who know that as Georgians we must stand for inclusion, equality, and fairness for all,” Norwood said at the time.

On Tuesday, Norwood labeled herself as the only independent in the race during the Atlanta LGBTQIA Youth Mayoral Forum though municipal races in the city are non-partisan. She also said she opposes President Donald Trump's ban on transgender troops in the military.