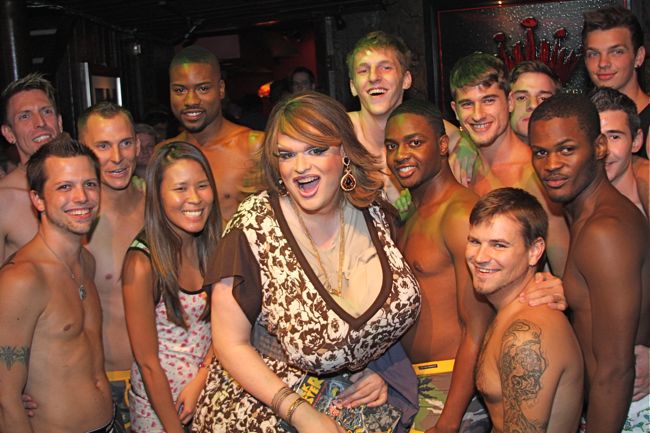 Fans of local legend Mary Edith Pitts got a shock Dec. 16 when the camp drag fundraiser extraordinaire left a cryptic message on Facebook. A week later, she confirmed that she is no longer at Burkhart’s. “It’s just time to move on,” Richard Cherry, Mary Edith’s alter-ego and now-former entertainment director at Burkhart's, tells Project Q Atlanta. Around 11 p.m. on Dec. 16, when Mary Edith (photos) would usually be squeezing her huge fake butt through the crowded bar, Cherry was instead home posting a new status on Mary Edith’s Facebook fan page:

“Letting go of what we are aware no longer serves us now & walking into the unknown, is taking the next step. There is an innate desire in us all to grow yet in any type of growth & change something has to end for something new to begin.”

Cherry tells us that there is “no ill-will,” and that “I wish Shavonna and the rest of the girls the very best of luck in all that they do.” The do-gooding double-D doyenne—who celebrated 20 years in drag in May, plus an underwear fashion fundraiser as part of a giant fundraising birthday weekend in July—assures us that while she is leaving Burkhart’s, the raucous bawdy performances and the HIV charity fundraising aren’t going anywhere. “That’s who I am,” Cherry says. “Every opportunity I have to raise money against HIV and AIDS will be taken.” As always, tips and proceeds to any and all Mary Edith performances will be earmarked for Jerusalem House and Grady Infectious Disease Program. “Look out for the next chapter,” Cherry says.

And the next chapter is already shaping up. Some plans Cherry is playing close to his vest, but part of what the future holds is out: Mary Edith Pitts accepted a position on the board of Jerusalem House in the New Year. “I’ll be doing lots of fundraisers around that,” Cherry says, “and the birthday fundraising will continue throughout the year so that in July, we can give out those giant checks.” So don’t worry, loyal Mary Edith fans. “You haven’t heard the last of Mary by any stretch,” Cherry says. “I really want say thanks to everyone for helping me raise more than $100,000 for the birthday fundraiser in just the last five years, and thanks for the support during the 11 years that I was at Burkhart’s. I intend to keep it going. Watch for new and exciting things yet to come.” We’ll be keeping an eye out, girl.