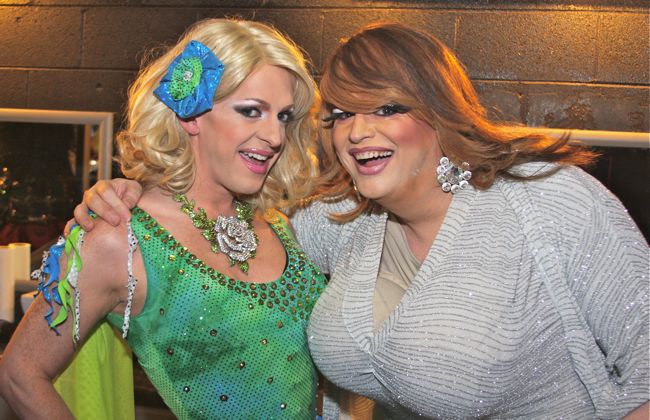 Atlanta drag personality Mary Edith Pitts turned, ahem, 21 on Saturday and celebrated with the fundraising flair you’d expect from this double-D-cup doyenne of do-gooding. Joining her was a charming Pandora Boxx from the second season of “RuPaul’s Drag Race,” along with a trio of hunky guys who auctioned themselves off. No, not in that tawdry Craigslist sort of way. But for charity – it’s a Mary Edith Pitts event, after all, and she was raising cash for Jerusalem House. The crowd included City Council member Alex Wan (third photo right), also the charity's development director, and its executive director, Charlie Frew (third photo left).

Pitts serves on the board of the charity that provides housing for people with HIV, though AIDS causes have always been on the receiving end of her fundraising largess. “Jerusalem House believes ‘Housing is Healthcare’ for homeless and low-income individuals and families living with HIV/AIDS and leads the Atlanta community to meet the needs of this population,” Pitts told Project Q Atlanta ahead of the event. “What impresses me most about the organization is 91 cents of every dollar raised goes to program services.”

The event at Jungle raised $11,141, an amount that includes a $1,000 donation from Fenuxe magazine, one of the event sponsors. Pitts couldn't be more pleased.

Thank you all for a spectacular night! Pandora Boxx and all the girls put on such a great show. Most importantly, thank you to all of you who took the time to come out and support Jerusalem House and its mission. I am blown away by everyone's generosity and support. Total to be announced tomorrow when we finalize the silent auction sales. Thank you from the bottom of my heart! Love and lashes, MEP!