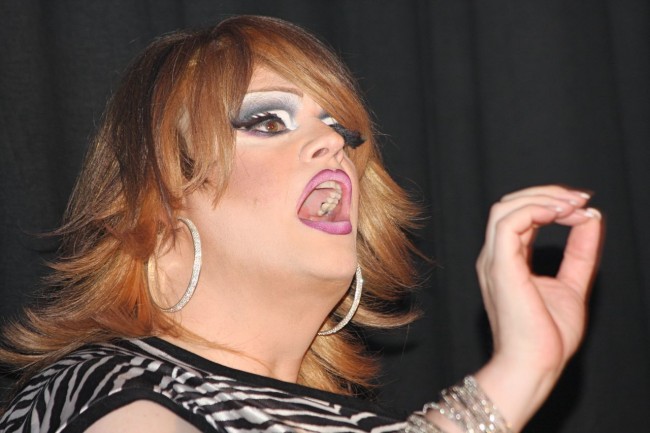 With fundraising prowess that makes many a non-profit envious, Pitts will again donate tips and proceeds from the show to two beneficiaries – Jerusalem House and the Grady Infectious Disease Program. The evening includes performances, a raffle, door prizes and a hunk auction. 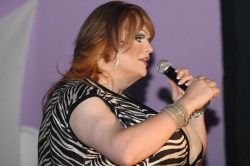 We recently caught up with the former Armorette as he put the finishing touches on plans for Sunday’s show. He talked about the origins of his drag persona, why Mary Edith Pitts has traded (some) raunch for (some) refinement, what motivates the prodigious fundraising and how drag impacts his personsal life. After two decades as Mary Edith Pitts, Cherry is clear about one thing:

“I feel like the luckiest person in the world because I get to do what I love to do with the people I love at the best bar in the city,” he says.

Project Q Atlanta: How did you get your start in drag?
Mary Edith Pitts: I got started doing drag as a fluke. I was painfully shy when I would go out to the clubs and then one Halloween I went out in drag with my best friend Barry. It was like putting a mask on and the quiet shy guy was gone and the glamourous outgoing Cherry Pitts was created. I did that character off and on for a couple of years until I was asked to do a camp contest at Backstreet in 1990. I had no idea what camp was but it was explained to me it was just funny drag.

My friend Patrick out in Carrollton went to his mom’s attic and brought me some clothes from the 70s. One of those outfits was a lime green bell bottomed polyester pant suit. When I put it on, it was huge, so I ended up stuffing it with bed pillows. Thus the hips were born. I used a skirt for a top and every time I put my boobs in, they slid down my chest. I laughed because it reminded me of Carol Burnett’s Norma Desmond character. A few weeks later, I entered the contest and won. I can’t believe it was 20 years ago on Mother’s Day.

How was Mary Edith Pitts born?
I came up with my drag name this way: I knew I wanted to have three names because I felt the rhythm made it stick out more and I knew I wanted to keep the last name of Pitts. I also loved the way gay men called each other Mary. So I just needed a middle name and then it just hit me. Edith as in Archie Bunker’s wife. I said it a couple of times and it just sounded right. 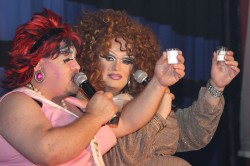 You dedicate your work to HIV-related charities. Why? Have they always been Jerusalem House and the Grady Infectious Disease Program?
I do it because I’ve lost some really dear friends. My best friend years ago was a guy named Barry who lit up the room and was full of life. He moved away shortly after becoming positive and at that time, there were no drugs, there was just a diagnosis. Shortly before he passed away, he wanted to see me but I didn’t have the strength to see him that way and say goodbye. I have lived with so much regret because of that decision but it also gave me determination. I promised if I ever had a chance to give back and make a difference, I would.

Shortly thereafter, I started performing as Ms. Backstreet and decided every tip I made on Sundays would be given to fight HIV/AIDS. In 1993, I was a candidate for Homecoming Queen (AIDS fundraiser) and raised $12,000 for Project Open Hand. In 1994, I raised over $24,000 for the Grady Infectious Disease Program, again as a candidate for Homecoming Queen.

Finally in 1996 I was crowned Homecoming Queen after raising more than $29,000 for AID Atlanta. That same year I officially joined the cast of the Armorettes and volunteered with them for almost 15 years. Over the last five years, I turned my birthday into a signature fundraiser that has raised almost $100,000 for HIV/AIDS. My goal this year is to raise $60,000. All totaled, I would say I’ve raised over $250,000 directly and been a part of raising over $1 million with the Armorettes for numerous metro and regional organizations.

What special things can fans expect during Sunday’s anniversary event? Tell us about this hunk auction — who are these men? Has Mary Edith road tested them and given them her stamp of approval?
I’m really excited to have the premiere of a documentary short – about eight minutes — about my fundraising efforts at the show. I’m really lucky some of the city’s finest entertainers will also be a part of the show. It means a great deal to me that people would give of their time and tips to help out such worthwhile organizations and celebrate my 20th anniversary. There will also be a raffle at the door for great door prizes as well as a 50/50 raffle for cash. I’ve got four hunks that will be interspersed throughout the show with a little something for everybody’s taste.

Has the Mary Edith Pitts persona changed over the years? We vividly remember a performance some years ago at Backstreet in which you sat on a toilet on stage and pulled (fake) pooh out. But today, Mary Edith seems more reserved. Is she getting older and less likely to be so raunchy?
I would say the outward appearance has changed dramatically — she no longer wears campy glasses, the body suit is much larger and the overall look is more refined — but she still loves to do the unexpected. Unfortunately, there isn’t a lot of room for props these days, so its hard to do some popular numbers from years ago. But my two most requested songs are the toilet number and saving all my love which I still do every once in awhile. 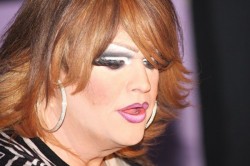 Does being such a well-known and popular drag performer impact your personal life? Dating life? Professionally?
I’m really so very lucky because people have been so nice when they meet me. It’s very nice when people take the time to say hi and share some nice words with me. The dating part has been more difficult for me to navigate. I’m still rather shy outside of drag and much quieter than people may expect. I think sometimes people forget that Mary Edith is a character that is put on and then taken off.

In terms of my dating life, I’m usually too shy to say hi to men I’m attracted to and I think a lot of guys think I would act like Mary Edith instead of just being Richard. When I date, I think of myself as a romantic and love quiet evenings at home, listening to music — Ella Fitzgerald, Diana Krall, Michael Buble — reading a good book or cuddling up and watching a great movie. Interested?

Have you ever had sex while in drag?
Does a hand job count?

What kind of sex would Mary Edith Pitts have?
Any she could get!