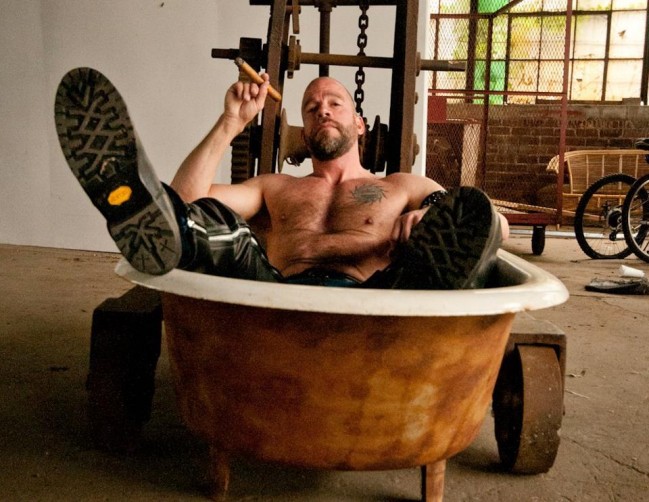 Think kink. That’s how to measure a year each month and on every page of a new 2013 calendar of Atlanta’s gay leather men and more playful local studs representing other fetishes in the Dirty Boys Calendar on sale now to benefit Lost-n-Found Youth.

The brainchild of Atlanta Panther L/L member Lizzy Fountain, the January 2013 – January 2014 calendar brings you 13 months of kink to brighten 396 of your days with sexy local studs. To bring the calendar to fruition, Fountain enlisted the help of fellow shutterbugs Lee David and Erin of Wicked Kitten Productions to get the hottest shots.

The cover (top photo) is graced by none other than Mr. Atlanta Eagle 2009 Sir Alan Penrod. He and Pup Nitro, the fetish power couple behind Atlanta Leather Pride, Hotlanta Rubber Weekend and Southeast Black & Blue Weekend, appear together and separately in the calendar.

But you don’t have to wait to get your hands on the Dirty Boys, in calendar form anyway. Preview all the shots and buy the calendar online now. It’s $20 if you want to pick it up at Black & Blue or other local event, $26 if you want it mailed to you. And don’t forget, proceeds from the calendar sale go to the Atlanta-based Lost N Found Youth, which helps LGBT homeless youth get off the street and moving forward with their lives.

Photos from the Dirty Boys Calendar