Several LGBT landmark parties and fundraisers that help you mark each year as it passes have announced the 2010 dates for their events. Here’s the who, what, when, where and why of what you’ll be up to through October.

Yes, it’s this week, and we’ll be updating you with details as the days count down. But how could we not include the MondoHomo Dirty South Festival, a grassroots startup that has become an annual must-do?
WHO: LGBTQQI alternaqueers who like to rock
WHAT: Arts, counterculture, social justice, DJs, drag, burlesque, politics, slam poetry, theater, dance parties and more disco, punk, hiphop and electro acts than you can handle.
WHEN: May 27-31
WHERE: Mostly at Eyedrum Gallery
WHY: Because there should be room for everyone in the queer village.

Premiere Party
Attended by over 600 people, Premiere Party includes a cocktail party, spectacular silent auction, and the best music in town.
WHO: A-listers, activists, wannabes and anyone else who’s down with helping LGBT youth.
WHAT: This year’s theme is a “White Party” with music by DJ Chris Griswold.
WHEN: June 12
WHERE: Mason-Murer Gallery
WHY: CHRIS Kids’ TransitionZ (formerly Rainbow) program for homeless and displaced LGBT youth is one beneficiary everybody can love. 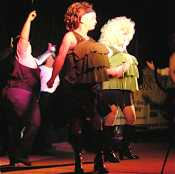 The East Point Possums bring on the camp drag for worthy causes each year. The 13th annual show benefits Atlanta Pride, the group’s largest single fundraiser of the year. For 2010, Atlanta Lesbian Health Initiative is also a beneficiary.
WHO: Kings and queens, and everyone gay and straight alike pack this show each year.
WHAT: This year’s program features event organizers The East Point Possums, as well as acts like Gigi Monroe, perennial favorites like GinnyTonic–a founding member of the Armorettes, Alexandria Martin, and Wild Cherry Sucret, plus the East Point Villagers and some newcomers.
WHEN: June 19, 8 p.m. – 11 p.m.
WHERE: The Commons in downtown East Point, across from City Hall
WHY: Because everyone loves Atlanta Pride and ALHI, but mostly because it’s a friggin’ no-holds-barred throwdown of fun. This is the first of six key events in Atlanta Pride’s Stonewall Week.

The gala event featuring the Equality Awards & Silent Auction attracts politicos and the politically conscious, like state Rep. Karla Drenner and Decatur City Commissioner Keisha Cunningham (photo).
WHO: Georgia Equality and honorary host Atlanta City Council President Ceasar Mitchell this year honor local community leaders Ken Britt, co-chair of the National Board of HRC; Fulton County Commissioner Nancy Boxill; Georgia Safe Schools Coaltion’s Maru Gonzalez and Austin Lauferweiler; and state Rep. Mike Jacobs, who introduced an anti-bullying bill that was passed earlier this year.
WHAT: Cocktail VIP reception, dinner and awards ceremony.
WHEN: June 24, 5:30 p.m. – 9 p.m.
WHERE: Venetas atop the Hilton Garden Inn
WHY: It’s all about politics and the advancement of LGBT rights in Georgia. Get into it!

Pride Run
This fun run for all skill levels steps off for its 20th year.
WHO: Frontrunners Atlanta holds runs each week, and this is their big fandango for Stonewall month. This year’s event benefits H.E.R.O. For Children.
WHAT: Put a number on your chest and join the crowd.
WHEN: June 26, 8-11 a.m.
WHERE: Piedmont Park
WHY: If running off steam, healthy living and being a “H.E.R.O.” to kids aren’t enough to get you in the action, perhaps the prospect of watching fit runners sweat can get you there.

One of the few surviving big events left from Atlanta’s heyday of circuit-type parties, but the driving beats, shirtless chests and beloved beneficiaries still keep packing them in by the hundreds.
WHO: Hotties, bodies and notties who like to dance and mingle to the sounds of international DJ Roland Belmares, who returns again for the event.
WHAT: Pool party + dance party = fun
WHEN: July 24, 4 p.m.-11 p.m.
WHERE: Piedmont Park Pool
WHY: Um, because it’s a blast? But also, due to generous donations and underwriting, 100 percent of tips and sales go directly to Jerusalem House and AID Atlanta. Last year’s $93,000 donation brought Joining Hearts to more than $1 million in contributions to the HIV/AIDS cause.

Backpack in the Park 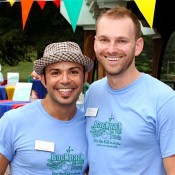 Since 2006, LGBT Atlantans come together annually for the Backpack in the Park outdoor picnic with carnival games. Admission is one backpack full of school supplies for local disadvantaged youth.
WHO: For the Kid in All of Us, the same people who bring you the holiday season Toy Party.
WHAT: Dunk cute volunteers in the dunking game, eat great food, mix and mingle with some of the most generous hunks and dolls in Atlanta. This year, For the Kid launches a new partnership with Charitee Heart, a supplier of quality backpacks and other consumer items. Event supporters can purchase Charitee Heart’s unfilled backpacks early by shopping online, then filling them with the requested items. The company will then donate 10 percent of all sales back to the event.
WHEN: Aug. 1, 4 p.m. – 8 p.m.
WHERE: Piedmont Park
WHY: Did we mention the needy kids and the cuties in the park?

AGLCC 2010 Community Awards Dinner
The annual dinner that awards LGBT business leaders from the Atlanta Gay & Lesbian Chamber of Commerce.
WHO: Nominations are open in the categories of Businesswoman of the Year, Businessman of the Year, Member of the Year, Corporate Ally and Guardian Angel (non-profit). Members can e-mail nominations to Ted Bruner, group president.
WHAT: Fancy dinner, community spirit and the recognition some of these folks so richly deserve.
WHEN: Aug. 20, 5 p.m. – 10 p.m.
WHERE: W Atlanta Midtown
WHY: LGBT businesses support a strong community. In tough economic times, our patronage and recognition go a long way.

Atlanta’s LGBT film festival brings movies by, for and about our people to town from all over the world.
WHO: Diversity is the name of the game. A flick for every L, G, B and T. Yes, this means you.
WHAT: Movies, silly. Narratives, documentaries and shorts.
WHEN: Oct. 1-7
WHERE: Midtown Art Cinema
WHY: Reflections of ourselves and our brothers and sisters around the globe aren’t just entertaining, they’re vital. 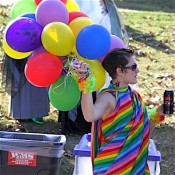 Vendors, entertainment and events in the park and the annual parade spark uncountable official and unofficial parties, political actions and corresponding weekend events.
WHO: The Atlanta Pride Committee and you, you, you and you!
WHAT: The 40th local event, scheduled this year to align with National Coming Out Day, is the largest LGBT gathering in the Southeast all year with thousands and thousands of your closest allies.
WHEN: Oct. 9-10
WHERE: Piedmont Park
WHY: Hello? Because LGBT Atlanta has immeasurable Pride in ourselves and faith in our movement toward equality. Duh! 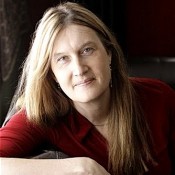 The fourth annual event that brings LGBT poets, authors and writers to Atlanta is growing by leaps and bounds each year.
WHO: In addition to other visiting and local authors, guests include keynote speakers IGLHRC Director and fiction anthology editor Cary Alan Johnson as well as professor and prolific trans writer Jennifer Finney Boylan (photo).
WHAT: Booksignings, poetry slam, music performances and much, much more over four days.
WHEN: Oct. 13-16
WHERE: Various venues across Atlanta and Decatur
WHY: No longer the red headed step children of the literary world, LGBT writers tell the personal stories that advance LGBT equality by putting a face on the movement with the visibility of each published piece.

WHO: AID Atlanta brings thousands of individuals, organizations and corporations together to raise money and show support for the continuing AIDS crisis and HIV care and services.
WHAT: The 20th annual event and its theme “From All Walks of Life: Every Life Deserves Hope” calls back everyone who has ever been involved in past Walks.
WHEN: Oct. 17, noon – 4 p.m.
WHERE: Piedmont Park
WHY: HIV/AIDS knows no boundaries. Enough said.