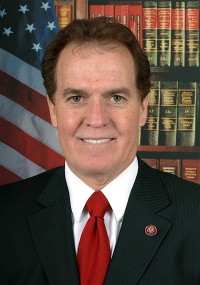 U.S. Rep. Phil Gingrey (R-Marietta) is sticking his nose in the recently passed gay marriage measure in the District of Columbia. He and other GOP lawmakers want to put the matter to voters.

Shortly before Christmas, D.C. Mayor Adrian M. Fenty signed the measure to allow same-sex marriages in the District. The City Council approved the ordinance 11-2 in mid-December.

But all DC legislation must be approved by the U.S. Congress. If no action is taken either way, the measure that allows gay marriage goes into effect on March 1.

That’s where Gingrey (photo) and his ilk come in.

The Georgia congressman has joined 38 other GOP lawmakers in signing an amicus brief filed in support of a lawsuit by Stand For Marriage DC that calls for a voter referendum on whether same-sex marriage should be legalized in the District.

A District of Columbia law blocks voter referendums on matters of civil rights—nice, huh?—so opponents of marriage have already lost one round on this very issue before. In early December, the DC Board of Elections & Ethics reaffirmed the law and blocked putting the question to voters, allowing the city council and the mayor to act.

But with the help of Gingrey, 36 other House members and two Senators, the sore losers are giving it another shot.

The Atlanta Journal-Constitution quotes the amicus brief in part:

And this is the party for less “Big Government.” Just sayin’.

For perspective, Gingrey is one of three Republican House members from Georgia—alongside Lynn Westmoreland and Paul Broun—who chose not to vote on several pieces of legislation that the Human Rights Campaign uses to rate members of Congress on LGBT issues on its Congressional Scorecard.

He’s in familiar company. Among Georgia’s seven U.S. House Republicans, just one — Rep. Rom Price — scored anything other than zero out of 100, whether by voting or opting not to vote. Price received a 10 for voting against a procedural motion that would have effectively killed the Local Law Enforcement Hate Crimes Prevention Act.

Just like when HIV/AIDS activists urged voters to contact their congressmen in September when $19 million of AIDS funding in Atlanta alone was in jeopardy, Gingrey was on the list of Georgia legislators on the House Energy & Commerce Committee late to weigh in on re-enacting the legislation, which ultimately passed and was signed by President Obama on Oct. 30.

Tying up the courts and the process isn’t new to any Congress member, of course. But many dip their toes into social issues in the name of their constituents. To let Phil Gingrey know what you think on this latest show of his views, click on his name or call his Washington office at 202-225-2931.