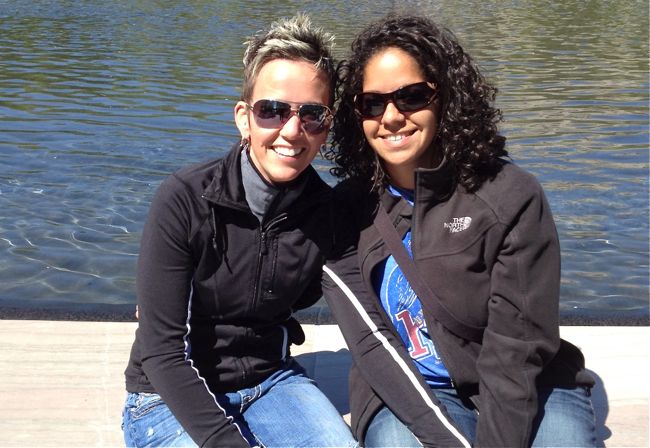 A lesbian couple in Marietta says the managers of Laurel Park Tennis Center objected to their pre-match smooch and told them that they are no longer welcome at the public facility. Kristie Toothman and Alpha Dwyer (photo) say that on June 1 they paid their hourly rental fee for a court at the tennis complex on Manning Road in Marietta, warmed up and – like they’ve done every time they’ve played there in the past – shared a kiss across the net after warming up and before starting their match against one another. “We met in the middle of the court at the net and kissed to say good match and let’s get started,” says Dwyer, who lives within walking distance of the tennis complex. “It was just a very plain kiss, my grandma kiss. It was nothing,” Toothman adds. But a manager at the complex came out to object, complaining that they can’t “have any of that on the court” and that it was offensive to nearby children, Toothman says. The same employee has seen the couple before, greeted them by name at the rental counter and hasn’t objected in the past, Dwyer says. “For that particular day, she felt the need to come out to the court,” she says. Upset over the incident, the couple grabbed their equipment and headed inside the center’s office to discuss what happened and ask for a refund. That’s when a man behind the counter started acting out what he says happened, including rubbing his chest and imitating a much more passionate act than actually took place, Toothman says. “He says we were basically having sex in front of the children, which was a complete fabrication. I started getting infuriated,” she says. “They said we weren’t welcome to play tennis there. They tried to give us our money back and we didn’t want it. We grabbed our balls and left.” The couple has returned to the park but not to the tennis center. Laurel Park is part of the City of Marietta’s parks and recreation department. The tennis center is managed by Tennis Dynamics, which is operated by James and Jennifer Weber, according to the Georgia Secretary of State. On Tuesday, an employee named Jennifer answered the phone at the tennis center. She said she was a manager with Tennis Dynamics. But she declined to answer questions from Project Q Atlanta and said someone would respond after they researched the incident, but she did not say when that would take place. For Toothman and Dwyer, the incident left them shocked and angry. “It’s 2012. I can’t believe I can’t kiss my girlfriend on the tennis court to wish her good luck,” Dwyer says. “They were steadfast in telling us that it is not OK in that park because of children and not wanting people to see that. They have a chance to be open and they choose not to be.” Toothman wants an apology before the couple returns to the park’s tennis courts. “The thing that is most frustrating is that ignorance still exists. I want to give exposure to the people that aren’t letting us freely live our lives. I would love an apology and love to play tennis there and feel open and free. I don’t know if that is ever going to come. It is about exposing them for who they are and for the way they treated us,” Toothman says.