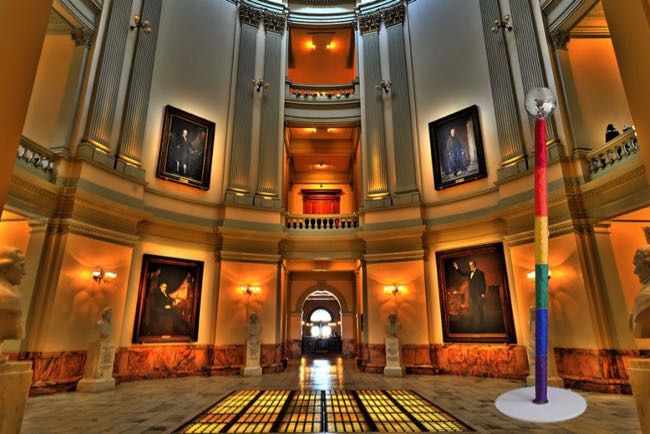 A Florida man trying to erect a nearly seven-foot Gay Pride Festivus Poles in state capitols across the country now has his sights set on bringing it to Atlanta.

Chaz Stevens and his Humanity Fund have already found success in a handful of places, including Florida, with plans for poles in Illinois, Michigan and Washington. Earlier this month, he petitioned the Georgia Building Authority to erect the pole with glitter, a disco ball and rainbow colors at the State Capitol on Dec. 23.

“Why Georgia? Really? Why not, given Georgia’s historical tolerance for differing views (wink),” Stevens wrote in an email. “If anyone in the South could use an erection, it’s those Confederate flag waving lunkheads.”

For the uninitiated, Festivus is a fictional holiday depicted in Seinfeld celebrated on Dec. 23. It features a family dinner where, in the words of Frank Constanza, celebrants get to “tell them all the ways they have disappointed you over the past year” followed by a “feats of strength” contest.

Stevens was inspired to launch his gay war on Christmas by Kim Davis, the Kentucky clerk who refused to recognize gay marriages. Via the Broward Palm Beach New Times:

Stevens says he was inspired by Kim Davis, the clerk from Kentucky who refused to grant marriage licenses to gay couples. “That drove me nuts,” Stevens says. “You should be able to marry, love and divorce whoever you want. Boy and boy, girl and girl — it's been decided. These rednecks from Kentucky said, 'Screw you.' I wanted to tweak these people.  What better way than to put up a gay pride pole right next to baby Jesus? It's not only the War on Christmas, but the Gay War on Christmas.”

Stevens also hopes the poles help his Humanity Fund raise $10,000 to support LGBT youth organizations. But the online campaign has raised less than $800 in the month since it was launched.

We've reached out to Stevens and will update the post if he responds.

UPDATE | Stevens tells Project Q Atlanta that state officials have approved his request to erect the pole on Dec. 23. He adds that the online fundraising campaign will pay for the construction and deployment of the poles, with funds leftover going to charity.

But he is a bit dismayed by the slow place of the fundraising effort.

“If our message was against the gay community, or pro-religion, the whack-a-doodles on the right would be handing money over by the crateful,” Stevens says in an email interview. “Too bad, as an atheist, I couldn’t say, 'Donate to The Humanity Fund or you’re going to hell.' How can you compete against that sort of product marketing? Follow our demands, or live forever in a fiery tomb.”

The self-identified straight man says the pole delivers a message of inclusivity and diversity.

“As a white, heterosexual male, I’ve been a life-long ally to the gay community. I firmly believe in the right to love and marry whom you want. As I’ve learned, love is something to be respected and admired, not banished to the fringes,” Stevens says.

“Our Gay Pride Festivus Pole celebrates these rights, and raises awareness to LBGTQ youth who are bullied,” he adds.