Make it three: How to bring a third into relationships 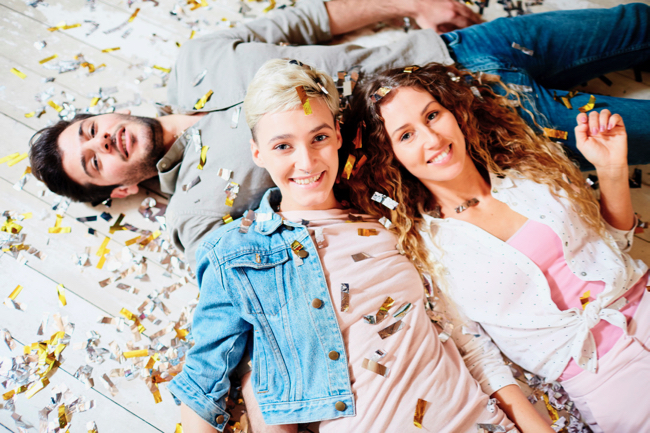 The book More Than Two: A Practical Guide to Ethical Polyamory also addresses the topic. “If we make others responsible for our own emotions, we introduce coercion into the relationship, and coercion erodes consent,” the authors say.

What does this mean? It means that what we feel is ultimately our responsibility. We are not victims to our emotions, and we are not powerless in the face of them. They are a creation of our thoughts, beliefs and life experiences – as well as our brain chemistry and brain functionality.

So, let’s get clear on what we mean by “making other people responsible for our feelings.”

Imagine that JaNae and Jacki have agreed to open up their marriage. All seems to be going well until JaNae meets a non-binary person, Bill, and there is a shared attraction. JaNae comes home and tells Jacki that she intends to move forward with Bill. Suddenly Jacki is feeling anxious, and angry.

Jacki expresses her feelings, respectfully, to JaNae and expects her to break things off with Bill. But JaNae doesn’t want to. Jacki feels even more anxious and angry, and now feels betrayed, too. Then, she expresses her feeling more loudly and aggressively, and she threatens to end their marriage if JaNae continues.

What is happening here? If we look at the list of personal rights in Part 1 of this series, JaNae is completely within her rights. She is only looking to make decisions and exercise freedom regarding her own body, emotions, and expenditure of time. She has also acted ethically, because she and Jacki had agreed they both wanted to open up the marriage.

Jacki, on the other hand is not within her rights. She is trying to make decisions about what JaNae can do with her body, or she’s trying to push JaNae to make a decision to break things off with Bill when she doesn’t really want to.

Is Jacki acting ethically? She began ethically by expressing herself in a respectful way, but when she didn’t get the result she wanted, she left ethical behavior behind and expressed herself in an intimidating and aggressive manner and made a threat.

Now, she does have the right to withdraw from the marriage, but in this case, she is using the threat of it to try and force JaNae to give up something she wants and has a right to. So, though she may have the right, she’s not acting ethically.

Looking at each person’s rights is a good place to start when we want to determine which of the people involved needs to examine their thoughts and feelings. She needs to try to change how they feel or act.

In this case, it’s Jacki. So, let’s say Jacki and JaNae have reviewed the list of personal rights, Jacki admits that she is in the wrong, and she is willing to examine her feelings and see what she can do to change them. She goes back to the beginning and asks herself, “Why did I feel anxious when I learned that JaNae and Bill have a mutual attraction and want to advance their relationship?”

She realizes that her next thought was, “What if she has great sex with Bill, falls in love with them and leaves me?” She has a belief that the power of sexual passion and the quality of sexual experiences (or a person’s sexual performance) can cause someone to fall in or out of love and influence major, life altering actions, like JaNae leaving her.

This belief didn’t spring from Jacki’s head – it is a common cultural myth here in the US, and in many other cultures as well. But is it true? And is it true of JaNae? Rather than assuming it is true, Jacki might want to ask JaNae about this and ask for the reassurance she needs. For most people, choosing to leave a marriage has to do with a lot more factors than just sex.

Second, when Jacki expressed her feelings, she expected JaNae to accommodate her and break things off with Bill. When she didn’t, Jacki felt betrayed. If she asks herself why, she might realize that she has a particular belief about how a loving relationship is supposed to work. Like many other people, Jacki believes that if you have strong feelings of pain, especially if triggered by your partner’s actions, your partner should change what they are doing in order to relieve your pain for you.”

This is exactly what people mean when they say, “making someone else responsible for your feelings.”

In other words, when we experience painful or uncomfortable emotions, we often think of them as a “problem” that needs to be “solved” because we don’t like feeling them. If we are feeling them because someone has violated our rights or boundaries, it is appropriate and ethical to look outward and require that person to change their behavior and return to respecting our boundaries. [For a full discussion of rights and boundaries, see Part 1 of this series: Boundaries.]

However, if we are feeling painful emotions when no one has violated our rights or boundaries, then it is appropriate and ethical to look inward, at our thoughts and beliefs, and question them as the first step in “solving the problem” of our painful emotions.

Coercion comes in when we are strongly attached to the belief that others should take responsibility for solving the problem of our painful emotions. When others don’t do this for us, we may escalate our displays of pain, hurt and/or anger, or make threats, in order to get the response we want. That is coercion.

Our example with Jacki went well, and after an initial bump, Jacki took responsibility of her own emotions, examined her beliefs and did what she could to change how she felt.

But what if Jacki had not admitted to herself that she is in the wrong? How would JaNae defend her boundaries? And what if that is really hard for JaNae? There are two sides to poor personal boundaries. One side is “making other people responsible for your feelings.” The other side is, “taking too much responsibility for the feelings of others.”

In my next article, I’ll address what that looks like and how to develop stronger boundaries and defend them.