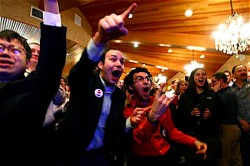 A rhetoric deluge, fierce campaigns from both sides and a national spotlight achieved contrasting results when voters in Maine and Washington had the last word on same-sex unions in their states.

With 53% of the votes, same-sex marriage opponents won the repeal of Maine’s law allowing the unions. The repeal makes Maine the 31st state to deny gay marriages at the ballot box.

Supporters of the law vowed to keep fighting until same-sex unions are legal in Maine.

“We’re in this for the long haul. For next week, and next month, and next year until all Maine families are treated equally. Because in the end, this has always been about love and family and that will always be something worth fighting for,” Jesse Connolly of the pro-gay-marriage group Protect Maine Equality, told ABC News.

In Washington, Referendum 71–the so-called “everything but marriage” law—appears to be passing at a 2-1 ratio. The state allows a large number of voters to cast ballots by mail as long as they are postmarked by Election Day. Some 30-50% of the votes won’t see a final count until Wednesday or Thursday.

The law would allow protections that mirror marriage for all registered Domestic Partners, leaving the one demarcation of the word marriage in tact exclusively for male-female couples. (Photo of supporters watching the Washington results via the Seattle Post Intelligencer)

Opponents of the domestic partnership law forced the law into voters hands, and advocates of the law say that the debate taught many voters a greater understanding of the plight of gay- and lesbian-led families.

“Were it not for the referendum, the law would have just quietly gone into effect in July,” Anne Levinson, chair of the Approve 71 campaign, told the Windy City Times.

“By forcing the referendum, those groups have likely done quite a lot to advance the cause of full equality for lesbian and gay families in Washington state,” she told the newspaper.