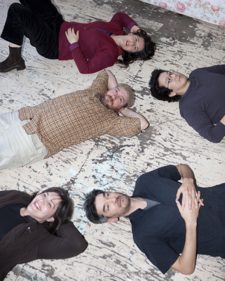 Buzz is already swirling over the return of ‘90s original alteraqueer band The Magnetic Fields. Listen to their single “Andrew in Drag” here and get the scoop on their tour backing a new album.

Led by the sublimely irreverent, deliciously queer Stephin Merritt (photo, left center), who is the driving force behind the group and one of the first gay singers who refused to change his love-song pronouns to sound straight, The Magnetic Fields are singular in their following and approach.

So go the lyrics for the new single, which will be the A-side of a Jan. 31 special release of a 7-inch single. The B-side “When Next in Love I Fall,” is an exclusive non-album track.

The band’s 10th full album “Love at the Bottom of the Sea” releases on March 6 with a return to their signature synth-acoustic mix. Pre-order it. Then the band takes off on tour, including Atlanta’s Variety Playhouse on April 14. Click it for ticket.

Let’s see. Jan. 31 hard-copy single and exclusive B-side, March 6 album and April 14 show. We hate waiting, but you don’t have to. Hear “Andrew in Drag” now. Click play below.

The Magnetic Fields – Andrew in Drag by MergeRecords