Tuesday finally saw the return of ‘90s original alteraqueer band The Magnetic Fields with the release of “Love at the Bottom of the Sea.” Buy it, stream it and watch the video here for “Andrew In Drag.” 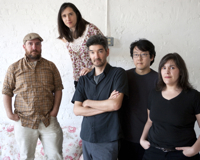 Some of the best rueful, playful gems include “I Don’t Like Your Tone,” “All She Cares About Is Mariachi,” “I’ve Run Away to Join the Fairies” and “The Horrible Parties.” Listen to all of them here before you buy, or go ahead, give in to temptation and download the album now.

Just as the album hit stores, the band hit the road for a tour on Tuesday as. They wind their way down the coast, hitting Atlanta’s Variety Playhouse on April 14. Until then, enjoy the video (above) for the first single, “Andrew In Drag.”