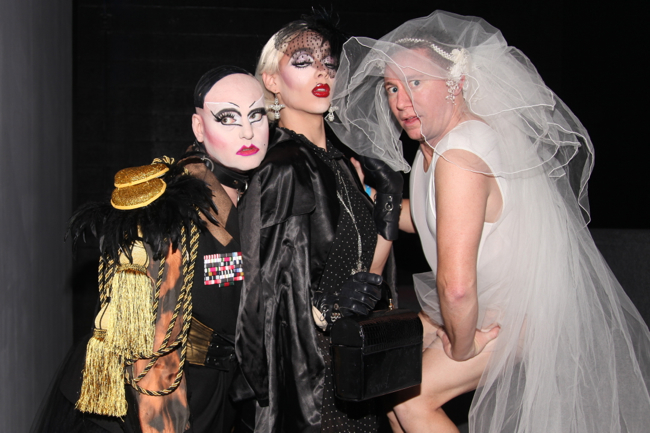 Only one thing can keep a Madonna party waiting, and that’s the gay icon herself. While thousands of Atlanta gays anxiously paced the concert pit revving up for Madonna to take the stage, others did the same at Madonnarama.

Those unlucky enough to miss tickets to the Material Girl’s MDNA Tour stop at Philips Arena were anxious to show off their love of all things Madonna at Jungle’s blowout celebrating the big night. Madonnarama eventually turned into a blowout around 1 a.m. while partiers in their various Madonna-inspired looks (top photo) kept their own best company with tunes pumped by DJ Ed Bailey.

It wasn’t anybody’s fault. Well, it was Madonna’s, and of course she’s allowed to be on drag time. All was forgiven at the concert when Madge hit the stage around 10:45 p.m., even if it was an hour between her two-hour extravaganza and the opening set by legendary DJ phenom Paul Oakenfold.

That whole fashionably late thing set Jungle’s party back, especially since the club’s house diva Phoenix was at Philips, too.

Check out the early crowd at Jungle, including the scariest Like A Virgin ever in an instant classic urinal shot.