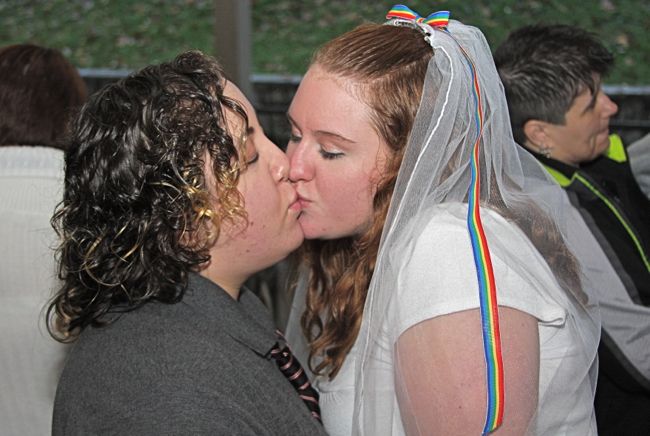 How do you counter a frothy-mouthed bigot spewing loads of anti-gay rhetoric? If you’re the Macon Telegraph, you provide a whopping four paragraphs to some random reader to swat it down. Aw, Telegraph, you’re so generous. On Sunday, the paper opened its op-ed pages to Rinda Wilson, a Macon resident and chair of the Macon-Bibb County Board of Elections. Apparently, she’s seeking a promotion to Georgia’s Hater-in-Chief. Here’s just a sample of how:

So it is logical to assume that if gay marriage is universally legalized in America, those health risks unique to gay sex would have to be minimalized or suppressed in order to rationalize the legal sanction. Likewise, wouldn’t it be likely that all public school curriculum would have to gloss over those same health risks in order to present homosexuality in a favorable light to the students? Inevitably, legalization would expand what is already a very distressing practice in some school systems of indoctrinating young school children that gay families are identical to traditional families in all ways—a view that flies in the face of the personal moral code of many parents in America.

So the Telegraph, when questioned about the hate-spewing, told the GA Voice that oh sure, we’ll publish a counter-point. The first one came Tuesday; the second on Wednesday. Here’s the entirety of that rebuttal, which was comments from a reader and not an op-ed column on Sunday – typically a newspaper’s largest day for circulation.

This letter is in response to Rhinda Wilson’s scathing piece in Sunday’s paper. I can’t believe your newspaper would give Wilson and her article the time of day, much less a lengthy spot in your newspaper. For her and the public’s information, she is the one sliding down the slippery slope with her misinformation on this very pertinent subject. She needs to be educated in this subject before she submits anything in writing to the paper. It makes her and The Telegraph look stupid and ignorant. All sex practices can be dangerous no matter who is engaging in them. Diseases have been associated with sex of all kinds since the beginning of time. Obviously, Wilson has never had the experience of raising a child who is a homosexual or been in a friendship with anyone who is gay. It is definitely not a choice and she is the dangerous one in society when she makes assumptions about some issue she obviously knows nothing about. Wilson and people who think like her are in part responsible for people who take their own lives because of the isolation they feel from society. If Wilson would like to become educated on this subject she is welcome to reach out to many organizations that can help her. She can start with talking to someone who is a proud parent of a gay person. For her information let it be known that “who’s that baby’s daddy” is a common question in today’s culture. Most of those babies got here the regular old-fashioned way. It is agreed that a loving family is an ideal place for a child to grow up, however, many traditional families have been nightmares to endure. What is deplorable is that Wilson and people who think like her are hiding under the Christian label. I would like to pose the question to Wilson (the same question I pose to my grandchildren) “What would Jesus do?” -- Barbara Long

Well thank you, Barbara Long. But the Telegraph owes its readers much better. They should take a look at the Atlanta Journal-Constitution. When it tackled same-sex marriage recently, they sought arguments form both sides of the issue, packaged them together and provided each with the same number of words to get their views across. Is that really too much to ask?