Lumberjacks give Mary’s the Manshaft [photos]

The guys were seeing plaid at Mary’s last Friday, when the quarterly ManShaft party took over with its Lumberjack Edition. Flannel and vintage men’s films were the backdrop for DJ Diablo Rojo.

It’s just every few months that the ManShaft group asks its members to take on a theme, so they take it head-on. In November, we caught up with them in the midst of ManShaft’s Fetish Edition. This time, they warmed up from the “burr and gurr” with fellow woodsmen by donning not just flannel, but suspenders, union suits, skull caps and tight denim. The result: a log jam of furry faces, bears, cubs and their admirers. 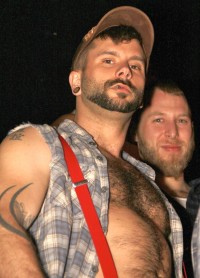 The evening started early with Mary’s Happy Trail Happy Hour with DJs Warm & Fuzzy and Sensational Gravity Boy. As the moon rose, DJ Diablo took over with manly rock, disco, electro, remixes and mashups. The Southern Bears raised funds for their activities by selling shooters and giving away bear hugs. Positive Impact’s MISTER program was there too, passing out free safe-sex survival kits.

And what ManShaft event would be complete without the ubiquitous Underwear Toss at midnight? They were throwin ‘em, catching ‘em and showin’ ‘em to their bartenders for a free drink. Drink specials were available all night for guys in Lumberjack gear.

There’s always something happening at Mary’s, with a different event every night of the week, including the renowned Mary-oke on Tuesdays.

The bar recently flip-turned its Thursdays into All-Request Night, where you make the DJ your personal jukebox. In turn, former DJ Thursdays became DJ Wednesdays, with musical themes each week. First Wednesdays of each month find the smooth grooves of Melloween, and Second Wednesdays see ManCountry. Look for Big Primpin’ on Third Wednesdays and The Honey Pot on Fourth Wednesdays.