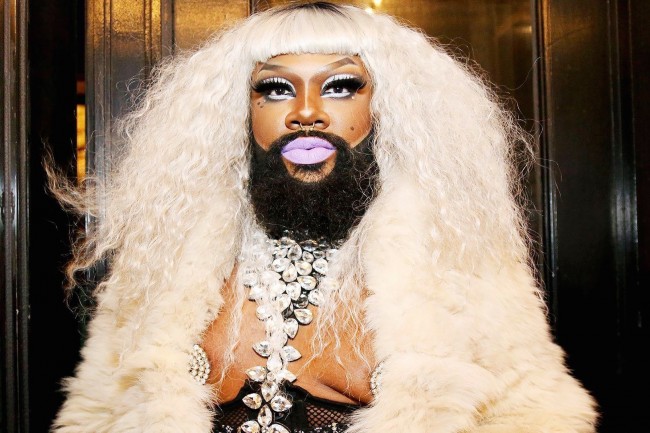 It’s been clear since the sophomore stages of her career that Lucy Stoole was going to be an underground queer icon. Performing numbers from punked-out Bikini Kill to mascara-stained Courtney Love, the performer's love of the complicated fem gave her grit. In the other glove, perfecting classic kitsch, donning full 1950s teen queen regalia a la John Water’s Cry-Baby, her technique displays theater-range thoughtfulness.

Whether constructing high glamour or avant-garde wit, there’s been no shortage of personality and passion in this Q cover model's repertoire, and it shows no sign of slowing for the next installment of Atlanta’s LEWK party on April 28 at My Sister’s Room.

Born in Kansas City, Kan., her early love of music mixed with the magic of make-believe planted the baby seeds of her lush current career.

“Ever since I was old enough to recite lines or memorize music, I've been performing,” she tells Q. “The first time I felt that anxious rush of excitement from the wings, I knew it was going to be my future, but I could never find the power I needed to really shine and own a stage until I started drag.”

Stumbling upon drag out of boredom one Halloween dressed as Diana Ross, this queen has since produced some of the most fashionable femmetastic looks in American art-drag. Rhinestone-studded to the supreme, she was crowned Chicago’s “Best Drag Entertainer” with a touch of ‘60s frosted diva and a bit of Barbie pink.

But her foundation for glamour was born and bred at home.

“My Mother was my original femmespiration,” Stoole says. “She was the popular girl in high school who stayed beautiful, regal and poised while still being able to hang out with the homies on the block and raise a child at 18 years old.”

“Of course, I take a bit of filth from Divine and fierce blackness from women like Pam Grier and Grace Jones, but my Mom will probably always be my biggest inspiration,” she says.

Not to long ago, Lucy Stoole was one of the only bearded queens on the scene. Now as one of Chi-Town’s most beloved, she’s non-stop performing away from her hometown’s stomping grounds. Chicago’s finally receiving its much-deserved recognition, and Lucy has felt grateful the drag community has been tight knit.

Still, she laughs, “As you know, family does fight. Beyond my own city, I'm starting to see a true change and wave of acceptance when it comes to ‘art drag’ and gender queer performers in small towns and big cities across this country who are doing their part to make and take space for all!”

The division between genderqueer and traditional drag is a common issue across the board, but the queen herself has a greater vision.

“One thing I see happening now that I'd like to see more is the art of drag being truly respected and supported by people outside of our community,” Stoole says. “Not because I believe it's required, but because some of these amazing artists deserve to be held in the same regards as other performers across all genres.”

It’s a trend that carried further implications than just the respect it deserves in the moment, she asserts.

“I see the newer generations really starting to team up to eradicate all these divisions within our community, I think that will ultimately lead to the future drag communities being open to all drag performers,” she says.

Those self-made looks – stoning her glitter goddess outfits into an otherworldly holographic realm – has moved the Lucy Stoole brand into other creative zones. Not only are there cute Lucy Stoole shirts (complete with bearded pink poop emojis), but there’s a line of sex toys, appropriately swirling iridescent robin egg blue and unicorn pink.

This article originally appeared in Q magazine. Pick it up all over Atlanta, and read the digital verison below.