Jack Art Gallery remembers the late LGBT activist Allen Thornell fondly with an exhibit celebrating love. And what would Thornell want? For Wednesday’s artists reception to benefit one of his favorite causes.

The gallery owners are using the show to celebrate the life of their good friend Thornell, who died Aug. 3 at the age of 38. Thornell’s death, like his life, sent ripples through the community, including a packed memorial service with a Who’s Who of gay Atlanta in attendance.

He was posthumously named an honorary grand marshal for the 2009 Atlanta Pride parade, and AID Atlanta dedicated the annual AIDS Walk to his memory and planted a tree in his honor during the event, among many other community-wide tributes. 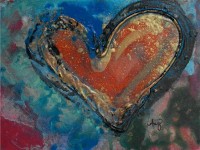 “We are excited to produce a show of such vibrant color and energy fused with the theme of love,” co-owner John McNamara says in a press release. “Allen would have been proud of this show, and thrilled that the proceeds would benefit a cause so near and dear to his heart.”

The exhibit will include a silent auction of some works that will, in addition to other proceeds, benefit Georgia Equality. Thornell served as executive director of the statewide gay rights group from 2002 to 2004 and was board chair when he died. The art show runs through March 5, and the gallery is open Wednesday through Saturday to view the show.

The Georgia Equality staff will be on hand at Wednesday’s reception to talk about their work and take direct donations. Besides the art exhibit, donations in Thornell’s memory can also be made directly to Georgia Equality here in support of their ongoing efforts for LGBT rights in Georgia.