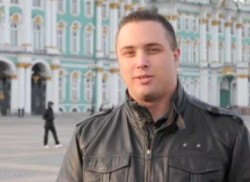 So much for that marriage equality thing and his bus tour that was to hit Atlanta later this month. Former marriage bigot turned advocate Louis Marinelli has had enough of you whiny liberals, the gays and HRC.

Marinelli (photo), who grabbed headlines in April when he renounced his five years of work with the anti-gay National Organization for Marriage, turned into a conservative advocate for marriage equality. The tipping point? The work he put in on NOM’s busload of bigots tour that bombed when it pulled into Atlanta in 2010.

So, Marinelli jumped on his same-sex marriage background and even planned his own Summer for Marriage Equality Tour, a 22-stop bus tour that was to kick off last Sunday and include an Aug 30 stop in Atlanta.

But plans got sidetracked when Marinelli got sideswiped by the Human Rights Campaign, which announced in July its own On the Road to Equality tour. That effort swings into Atlanta Oct. 7-9, right smack in the middle of Pride.

Marinelli grumbled that HRC’s tour took its inspiration from his own idea and quietly cancelled his bus tour. Not quite satisfied with that, Marinelli on Monday took another big shift: He’s quitting his marriage advocacy work, backing anti-gay Texas Gov. Rick Perry for president and stepping away from you whiny liberals.

My name is Louis Marinelli, the former NOM operative. Today I announced that advocating for marriage equality will no longer be the central focus of my life. I still support gay rights and will continue to blog about it but as for devoting my career or majority of my time to activism, I have no desire to do so. I am stepping away from direct activism.

Marinelli is so over his years of advocacy work that he’s scrubbed his website of any mention of his summer tour. He’s also deleted two posts – “No More sticking my neck out” and “A Statement regarding my future plans” – that detailed his conversion to non activist for marriage equality.

A day after his pronouncement, he hinted at another reason for pulling back.

I support marriage equality as a constitutional principle but there is no place for me standing among crazy, whiny liberals.

All of the back and forth prompted a supporter to ask Marinelli this: Have you done enough to counter the damage done while working for NOM?

Marinelli dodged the question in his response.

I will still be around and blogging and not hiding the fact I support marriage equality. I have only decided not to make advocacy the central part of my life. I appreciate all of your understanding.