Lost N Found board member accused of having sex with client 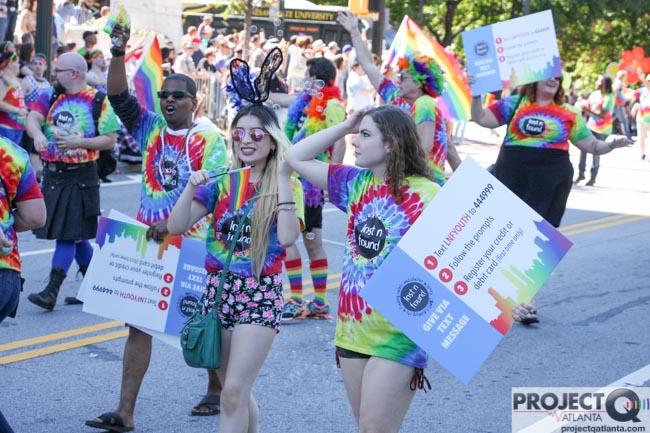 A Lost N Found Youth board member and prominent Buckhead hair salon owner was investigated after allegations surfaced that he had sex with a client of the LGBTQ homeless youth shelter.

The organization is also facing accusations that it retaliated against employees who spoke up about the allegations.

Project Q Atlanta spoke to several former employees or people who have had an affiliation with Lost N Found. They requested anonymity due to fears about the organization retaliating against them.

They allege that board member Steve Hightower had sex with at least one Lost N Found client in exchange for money. The organization serves LGBTQ homeless youth between the ages of 13 and 25. This client was allegedly in his early 20s.

One source with a past affiliation with the organization said the then-wife of a Lost N Found client told them about Hightower having sex with her husband.

“She came and told me that her husband had left her because he was sleeping with a board member who was giving him money and taking care of him,” the source said.

The allegations, which are apparently more than a year old, re-emerged this fall. That's when two people affiliated with Lost N Found said the organization fired them after they raised questions about the accusations.

One former employee knew the identity of the client Hightower allegedly had sex with. The now-ex-wife of that client confirmed the allegations with that employee. That employee said they notified Lost N Found management about the allegations on Sept. 19.

“I was going to talk to [the client and his wife], interview them and launch an investigation. I told [management] it was going to happen, and I needed a private room, or I could take them off-site if that was needed,” the former employee said.

The former employee said after meeting with the client and his wife, they would evaluate whether to notify Atlanta police.

“My initial thought was, if it was true, we could get ahead of it and stop the abuse and at the same time make us look a little good,” they said. “But other things went awry.”

The former employee said they were fired the next day for an unrelated matter.

“They wanted to protect Steve. Because of his money and his influence,” they said. “Without him, they would be nothing. They decided that money would be more important than lives.”

Another source said they were also fired by Lost N Found after speaking up about the allegations.

“The retribution thing is just unbelievable. It’s really insanity,” said a source with a past affiliation with the non-profit.

The source who spoke to the ex-wife of the Lost N Found client said they notified Lost N Found's then-executive director, Rick Westbrook, when the allegations first surfaced. Westbrook told Project Q this week that he only learned of the allegations after leaving the organization in May.

Hightower (second photo, right) denied the allegations against him and said he’s never had sex with any Lost N Found clients.

“We have dealt with that with our attorneys. It is totally untrue,” Hightower said. “It was fully investigated by a third party and everything was found to be false. They interviewed the youth – everything.”

Robert Ross, Lost N Found board chair, denied that the organization retaliated against people who brought up the allegations.

“Nobody lost their jobs about this,” Ross said.

Two former employees told a board member about the allegations in October, Ross said.

“We had an emergency meeting that afternoon of the executive committee,” he said.

The following day, Ross said the organization hired Atlanta law firm Taylor English to conduct what he called a “third-party investigation.” But Lost N Found board member Melissa McMorries is a partner at the firm.

“Totally different branches,” Ross said when asked about the conflict.

Ross said the two-week investigation included interviews with the client Hightower allegedly had sex with.

“They found there was absolutely no basis of truth to the claims and there was no need for us to take any action whatsoever,” Ross said.

“I take those allegations very seriously. So seriously I hired one of the largest law firms to do an independent study,” Alt said.

“We had an investigation done, and in that investigation, it showed that it wasn’t true. What pisses me off the most is that it takes money away from the kids that I have to take care of,” she added.

Ross said he doesn’t know why several former employees or people who have had an affiliation with Lost N Found would tell the same story about the allegations. Ross said it’s possible somebody has “a vendetta” against them.

“All I know is that nobody has done more for the organization than Steve Hightower. He has single-handedly arranged for food to go into that youth center, meaning we have not had to pay for food for a year,” he said. “We have been extremely blessed to be the recipients of his generosity through his Thriving Children gala. I don’t understand why somebody would want to damage somebody who has only done good.”

“Upon further reflection, what I sent you previously should be sufficient to close out your notes,” Ross stated in an email.

“To recap, the board of Lost-N-Found Youth recently learned of allegations involving a board member and client. We took those allegations very seriously and commissioned an independent investigation conducted by counsel. That investigation found no evidence to substantiate the allegations and this matter is closed. The board does not believe it is necessary to further verify that investigation and my statement as board chair should be sufficient,” Ross added.