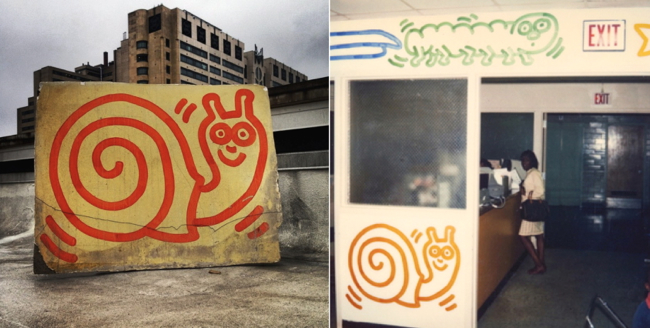 When is a snail not just a snail? When it was painted by a late, great gay master. Local photographer Matthew Terrell can attest to this. He helps reveal a historic art fragment depicting one little snail that should make gay Atlanta extra proud.

Like a modern-day “Indiana Jones’ or “Monuments Men,” Terrell went on a treasure hunt right here in Atlanta and emerged with a fragment of mural painted by heralded pop artist Keith Haring.

Mr. Snail, as the dangerously aged mass of dry-wall-and-rebar is now affectionately called, was once part of a whole forest of creatures painted by Haring in his signature style at Children’s Healthcare of Atlanta in 1988 (right, © Keith Haring Foundation via HuffPo). Originally intended as a “permanent” installation, only the chunk of wall featuring Mr. Snail survives (left).

Terrell, who calls Haring his "artistic hero," sheds light on the journey to the discovery after a demolition more than 20 years ago forgot the artwork even existed in storage. In a fascinating blow-by-blow for HuffPo Gay Voices complete with photos then and now, the artist – who you may know from his work with “Legendary Children” – not only chronicles the discovery for posterity but posits a theory on why the fragment may be all that’s left. And it’s not a pretty assessment.

This mural was lost because expansion and improvement are valued above all else in Atlanta. In his journals, Haring noted the mural as being "permanent"; however, the need for more space to serve more patients necessitated that the wing with the mural be knocked down.

Preserving the work of a gay man who had recently died of AIDS, during the peak of the AIDS crisis, proved to be too complicated and expensive a task. Only Mr. Snail could be pried off from under a window by the hospital facilities manager. Mr. Snail sat in a storage shed for more than two decades until I came along trying to find a trace of Keith Haring in Atlanta.

The stunning rediscovery connects gay Atlanta directly to one of the great gay artistic icons of the 20th Century. Hopefully Terrell’s account of saving Mr. Snail – his written chronicle, the fragment itself, and photos of the full lost mural in its original setting – can stand the test of time better than the original artwork did.

Mr. Snail will be hung in a new underground art gallery at Hughes Spalding Children's Healthcare of Atlanta.