Logo’s ‘A-List’ isn’t casting Atlanta, so we are 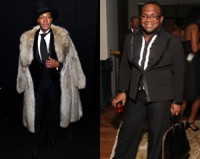 When we heard that Logo’s “The A-List: New York” was branching out to Dallas and Los Angeles, we had two thoughts: “People must be watching it though everyone claims to hate it,” and “Why aren’t they casting in Atlanta?”

The answer to the latter question is multi-pronged. First and foremost, the producers that also put out Bravo’s “The Real Housewives of Atlanta” can’t give up the gay cache of Dwight Eubanks and Derek J (top photos, l-r) to their much-lower moneymaker. They’re the real gay—or should we say really gay—housewives of Atlanta.

Besides that, as many a bitter reader is sure to note, who does Atlanta have to offer anyway? Well, we thought about it, and our local crew boasts more than enough personality—and yes, maybe even a touch of the requisite drama.

So what makes an “A-Lister”? Remember, other than the pseudo fame of Mike Ruiz and Reichen — who stopped in Atlanta last month to plug the show — no one ever heard of any New York cast member before the show debuted, so being actually rich and famous is not required. Like them, we can create our own stars.

Much more importantly, who would make for great TV? Seriously now, City Council member Alex Wan and entrepreneur and philanthropist Frank Bragg are probably real-life A-List, but they’re busy, and no one thinks reality TV is anything like real life anyway.

We need flash and funny. We need sass and circumstances. With tongues planted firmly in cheek and for entertainment purposes only, here are our nominees.

BEEN THERE, DONE HIM
Michael Alvear
Like Ruiz on the New York series, Alvear can provide the cutting quips that come with… um… experience. Also like Ruiz, he’s handsome, charming, fun at parties, always surrounded by cute boys, and brings to the table existing national exposure. He’s been a TV pundit on gay issues, one of the hosts of HBO’s “Sex Inspectors,” a syndicated sex advice columnist and a published author. In Atlanta, his Need Wood? appears on Project Q each Wednesday, and Sexcorcist runs in Creative Loafing.

TOUCHES GREATNESS
Richie Arpino and Mitchell Anderson
Our fictional show needs a power couple with high-profile connections if we’re going to get a few guest stars. As a salon owner and stylist to the fabulous as well as a photographer, Arpino makes big sexy splashes like his 2010 “Black & White” calendar.

His partner Anderson—the actor whose performance tore out our souls in “Relax… It’s Just Sex” and charmed our socks off as the violin teacher on “Party of Five”—moved to Atlanta and wowed stage audiences in “Bent” before making an even bigger impression as owner of the MetroFresh eatery. Most recently, we learned that he wants a Sandwich Empire.

The couple is besties with lesbian “Married With Children” star Amanda “Marcy Darcy” Bearse, so you know she’d be on there. Both men also have an eye toward fundraising events like fashion shows that would be perfect vehicles for TV viewers.

NETWORKING IT
Justin Ziegler
As director of the AEN business network, a real estate agent and a larger-than-life personality, Ziegler has the natural ability to gab with people from all walks of gay life in Atlanta. It seems our boy is always on a special project. Put his little black book and sense of community together with his ability to make just the right comment and bring diverse people together, and we have to have him for “A-List: Atlanta.”

NIGHT CRAWLER
Chris Coleman
Inherent in gay nightlife is the drama that is the bread and butter of reality TV. Enter party promoter Coleman, who not only draws a crowd but draws nationally known DJs to town. Our imaginary reality show needs both the extras in the background and the thumping beats of hot DJs to create the right spectacle. We can also cut to Coleman’s wheelings and dealings to make things happen, like Indulge at the W Midtown each Thursday, Thanksgiving Eve Butter Ball with DJ Tony Moran at Club Life, and Massive Fridays at Reign, whenever that happens.

MEDIA SAVVY
Tyler Calkins and William Duffee-Braun
“Connections” should be the middle name of this fresh young local power couple in the making. The launch of their glossy Fenuxe magazine this year shows there are brains behind those good looks. With Calkins and Duffee-Braun’s high-end photo shoots, a taste of the good life and the knowledge that size matters in their magazine, plus their knack for throwing must-attend LGBT creme-de-la-creme events, TV audiences would eat up a chance to get to know them and their friends better behind the scenes.

DO-GOODING DIVA
Tony Kearney
Known to many as the “now-deceased” Armorette Wild Cherry Sucret, Kearney is even better known for a quick, dry wit that could make him the NeNe of our bunch. He’s also closely associated with balancing his barbs with causes for which he’s passionate. Even with Wild Cherry “gone,” her spirit makes appearances at special events and fundraisers, and we can see a TV show as a good reason to dust her off. Kearney is one of the volunteer co-chairs of Atlanta Pride’s entertainment committee, so he’s always out there doing good in the neighborhood, another plus for plot thickeners.

PARTY PEOPLE
Barry Brandon
Singer, promoter and Heart Association giver Barry Brandon is nothing if not full of spunk. His signature look, his jovial never-say-die approach and singular events—the upcoming Robyn afterparty at Bottle Bar, Bedlam Wacked Out Blackout party at My Sisters’ Room and Bang concert, just in the next two weeks—and his partnerships among the younger, hipper faction of alterna-queers, musicians, DJs, bar owners and artists make Brandon must-see TV.

LEGEND IN HIS OWN MIND
Jonathan Jaxson
Reality shows were made for Jaxson. He came out to his mom in the heyday of sensationalistic daytime talk and scared up attention for his name-dropping habits and failed attempts at local event promotions. These days, Jaxson’s name is now most frequently spoken in the same breath as “Real Housewives” diva Kim Zolciak, so you know which reality role he’d play. “A-List” producers are already familiar with him through his on-again-off-again relationship with the Wigged One, so he’s a shoe-in. But he’s a natural anyway. Read more about the undying quest for notoriety and frenetic presence that make his foibles perfect for our reality show fantasy.

ALL CHARACTER
Baton Bob
A big splash in Atlanta’s gay consciousness has never happened quite like it did when “that bald black man in the majorette costume” started popping up on sidewalks twirling his baton around Midtown. All the mystery and perhaps the most unique entree of all time meant that it wasn’t until later that everyone found out Baton Bob is an eccentric with real heart, a true pleasure to talk to, and thus a perfect fit for our cast. We vote him Most Likely To Steal The Show.

What local personality do you think would be perfect for an “A-List: Atlanta” series? By all means, share in our comments section below.