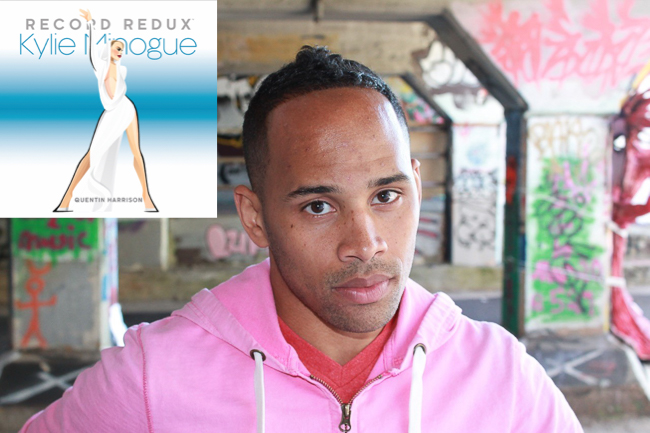 Want to turn your passion into a career? Then follow the example of Atlantan Quentin Harrison. Armed with an encyclopedic knowledge of music and pop culture, the author and columnist began publishing his Record Redux book series in 2016 with the Spice Girls, followed by volumes on the careers or Carly Simon, Donna Summer, and Madonna.

“The premise of the line is to create conversations about these female artists and groups that aren’t happening, or to redirect the conversations that are happening to focus on their catalogues in new ways,” Harrison tells Q.

There will be 14 books in the series. The fifth volume arrives this month and focuses on the career and discography of Minogue with statistics, insights and reviews of her music. The book stands as the first on the artist by an American, and the first by a person of color.

“This project is a bit of history in the making,” Harrison beams.

Minogue fans are living in golden times these days. In addition to Harrison’s book these last few weeks of the year, the Australian pop diva releases an expanded three-disc edition of her “Step Back In Time: The Definitive Collection” greatest hits package — including a 40-minute megamix produced by the Freemasons — and her live double-album and concert film from her Golden Tour.

Harrison took time to speak with Q as he prepared to release it on Dec. 15.

Her career took a different trajectory than most. She started out as an actress, then she transitioned into being a pre-fab pop star who then took the reins herself. She is more than a dance/pop kewpie doll. There’s a lot of artistry there.

A theme that emerged with the Kylie book is “subversive.” She changed the direction of her career. She learned to make accessible pop music and then she flipped the script and made some subversive pop music right there in plain sight. There’s something to discover in her music.

Have you met any of your subjects or gotten reaction from them?

I haven’t gotten to meet any of them, but I interviewed Melanie C from the Spice Girls once. Carly Simon sent me an e-mail when her camp got the book. That was pretty cool.

I attempted the traditional route, and it wasn’t working, so I publish independently. I did a Kickstarter campaign to fund the creation on my own terms. Each book is usually an eight-month process, but the Kylie Minogue book took nine to ten months. I wanted to pace myself differently after the Madonna book.

What comes next for you and the Record Redux series?

There’s a revamp of the Spice Girls book coming up, because there’s so much I want to do with them and I have a certain skillset I’ve developed since the first book. It will feature an updated discography since they have released several new solo albums since the first edition was published in 2016.

The next new volume will be Janet Jackson, then Bananarama, Gloria Estefan and Sheena Easton. Other volumes in the series will cover the ‘70s Supremes, Kim Wilde, Sister Sledge, Teena Marie and Joan Armatrading.

“Record Redux: Kylie Minogue” is available in soft-cover from Amazon and digitally from Selz. Look for an Atlanta release party in early 2020. Find more about Record Redux on Facebook, and follow Harrison on Twitter.