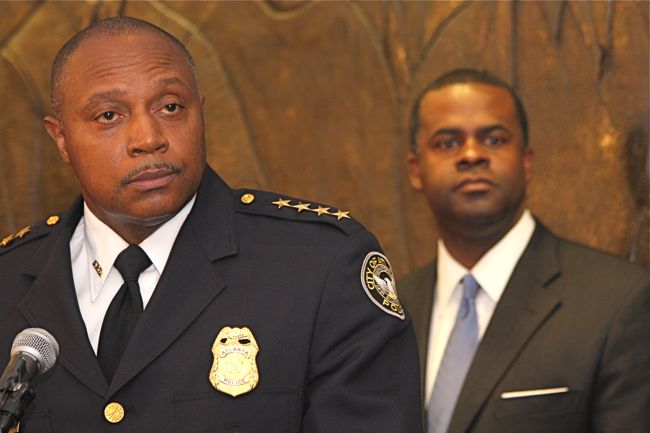 With a citizen oversight board now turning its attention to the role of Atlanta police supervisors in the Eagle raid, Creative Loafing on Wednesday urged Mayor Kasim Reed and his police chief to cooperate.

Sadly, that’s not likely to happen.

The one-year anniversary of the Eagle raid came and went last week with little fanfare. A Thursday hearing by the Atlanta Citizen Review Board ended with its members upholding complaints that two-dozen police officers falsely imprisoned some 62 patrons of the bar during the Sept. 10, 2009 raid. But the panel balked at recommending sanctions until they complete a study of the “systemic” problems within the Atlanta Police Department that led to the raid.

Later that night, two-dozen people held hands outside the bar on Ponce de Leon Avenue to remember the raid, a far different atmosphere from the trio of protests after the raid last year.

Neither Reed nor Atlanta police offered comment on the board’s findings or the anniversary of the raid. With a federal lawsuit still pending and an internal Atlanta police investigation dragging on, it’s unlikely that Reed or police Chief George Turner will embrace the CRB’s study over the next two months.

The Loaf hopes that’s not the case and urges its readers to turn their attention to the city’s mayor and top cop.

Now the community must turn its attention to Mayor Kasim Reed and Police Chief George Turner, who has been remarkable for his apparent lack of support for the board’s charter to investigate police misconduct. The CRB’s investigation into the involvement of higher-ups will not succeed without the support of the mayor and his police chief.

But Reed and the police department have taken a combative approach to their relationship with the review panel. It took the City Council to subpoena officers involved in the raid over Reed’s objection, and Turner has yet to support any recommendation from the board to discipline one of his officers.

We, however, no longer have patience with an administration that fails to take a strong stand against police misconduct — and for the civil liberties of all of its citizens, no matter their sexual orientation. Reed and Turner must immediately make clear that all members of the police department will cooperate with the CRB in its investigation, wherever it may lead. And those who don’t must be fired.