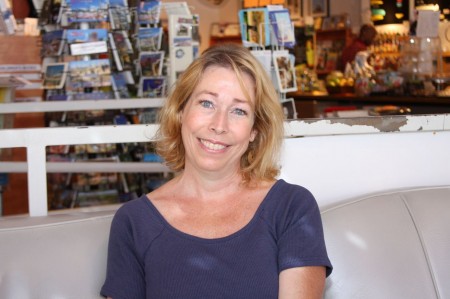 Neighborhood activist and communications consultant Liz Coyle is stepping into the race for the District 6 post on the Atlanta City Council.

The Atkins Park resident was in the process of filing her official paperwork Tuesday morning. Coyle, who is heterosexual and married, joins two gay men – Alex Wan and Steve Brodie – in the campaign to represent a heavily-gay area that’s had an openly gay council member since 1998.

Coyle says she appreciates the significance of the District 6 seat to gay Atlantans and stands ready to represent all constituents in the progressive district.

She says she volunteered with Cathy Woolard’s campaign for the District 6 seat. Woolard became the state’s first openly gay elected official when she unseated an incumbent to win the city council post in 1997. Anne Fauver, also a lesbian, was elected in 2001 as Woolard became City Council President. Coyle also worked on Fauver’s first campaign; Fauver announced earlier this year that she would not seek a third term.

Coyle has long been expected to enter the city council campaign, but delayed a formal announcement until Tuesday. She was planning to resign her board seat on the Atlanta Beltline Inc., to avoid any conflict, but attorneys for the organization advised her that the move wasn’t necessary. After a Beltline meeting Tuesday, she walked to City Hall to file her campaign paperwork.

Coyle, in a wide-ranging interview prior to her campaign launch, expressed a firm grasp of gay issues as well as others she plans to base her campaign on, including public safety, Atlanta’s quality of life, and city services and finances.

“The issues that people have in this district relate to safety and quality of life,” Coyle says. “We all pay a good amount of taxes to live in this district and we want to have a sense that we are getting the services we deserve. That is an issue whether you are a man or a woman, gay or straight.”

“The idea that some people can get married and some can not get married is foreign to me. If people love each other, why is it that some people get one treatment and others get another treatment? Of course I believe gay people should marry. I don’t understand in this day and age in the USA — I don’t understand how you can be against it frankly. For me it is just common sense,” she says.

On two other hot-button issues that often pit gay Atlantans against residents of District 6 – bar hours and access to Piedmont Park for large festivals such as Atlanta Pride – Coyle says she is sympathetic to both issues.

She worked on Neighborhood Planning Unit F, putting her on the front lines of licensing and permitting for nightlife establishments in Midtown. Coyle says she often heard the back-and-forth of bar and nightclub owners and residents who didn’t want to live next door.

“Neighborhoods and nightclubs are not compatible if they are immediately adjacent,” Coyle says.

As for the city’s current 2:30 a.m. last call, Coyle says she is “comfortable with where the hours are now.”

She also says that with the recent announcement that the state is no longer in a drought that she expects large-scale festivals will return to Piedmont Park at the same rate before restrictions put in place last year banned them. But she would also support the large-scale festivals being spread across several city parks, Coyle says.

The drought-related restrictions forced Atlanta Pride to move to the Civic Center in 2008. Festival attendance dropped and organizers trimmed their staff and cut expenses in the wake of the event. Pride returns to Piedmont this year, but was forced to shift the festival to late October to stage the event in the park.

“With the drought over, I would expect the city to return festivals to the parks and would be supportive of that. Let’s have some in Piedmont Park, let’s have some in Grant Park and in other places in the city,” she says. “But the parks do take a beating, particularly when there is a dry spell. We need to manager our resources carefully.”

Coyle has lived in Atkins Park since 1996 with her husband Greg and two teenage sons. As a teen, she lived for several years in Midtown.