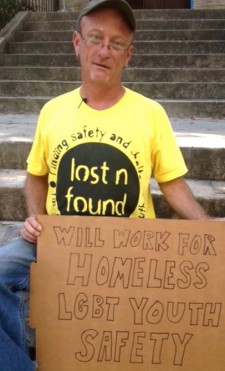 It’s going to be cold and rainy on Tuesday. That’s the point. On its one-year anniversary, Lost N Found Youth director Rick Westbrook climbs atop a truck that night for a 48-hour vigil to live on his wits and the kindness of strangers for a taste of life as a homeless gay youth. Could you handle it?

Westbrook’s interactive vigil comes almost a year to the day after he traded barbs with the YouthPride director and decided that a new, dedicated group was the only solution to really address the issues faced by LGBT teens scavenging for survival on the streets of Atlanta. That was even before we knew the extent of hot mess that YouthPride had become.

Armed with only a cell phone and ID, Westbrook will have it easy on his vigil compared to the real plight of LGBT kids with no place to turn. Here’s how bad it gets for them.

The Lost N Found truck and Westbrook’s 48-hour home will be parked in the Brushstrokes parking lot at Ansley Square, and the vigil begins at 6 p.m. on Tuesday. Lost N Found volunteers hope that lots of people will visit to fill the truck with coats, underwear, socks, canned food and other donations to help the kids of Lost N Found’s burgeoning six-bed facility and multi-pronged outreach programs. If you can’t come, consider donating online to the group’s efforts.

In a single year, Lost N Found has made a dent in the problem, secured its place in gay Atlanta, and acknowledged that so much remains left to do. The One Year Later Town Hall Meeting will update the group’s successes and needs for growth during Westbrook’s one break from his vigil. It takes place at the Rush Center on Wednesday at 7 p.m.

After the town hall, a Lost N Found Candlelight Vigil back at Westbrook’s temporary home in the Brushstrokes parking lot is planned for Wednesday at 9 p.m.