Listen Up: Queercore show at The Earl channels MondoHomo 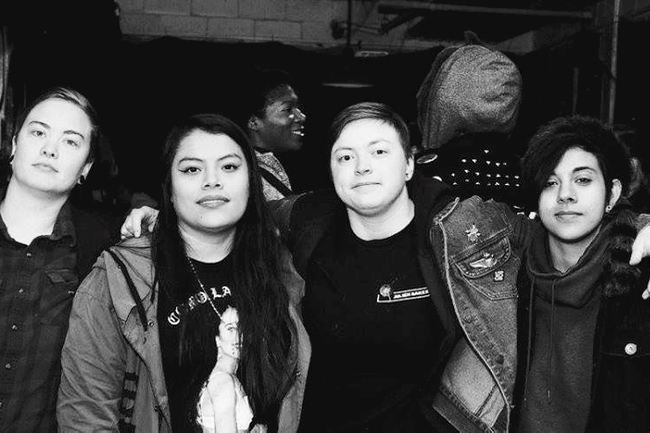 Athens has housed internationally successful cools like REM’s Michael Stipe and The B-52’s, and Atlanta badasses like Jayne County and Bradford Cox have bolstered our state’s queer musical claims, but queer representation in Georgia bands has mostly been sparse over the decades.

DIY units, however, have always been our main source of queer sound. The sex-positive punx Pagan Holiday and queercore Team Dresch from the Carolinas made waves in the 90s house show circuit, but it was ATL’s own Mondohomo Fest that truly amped queer rock to larger audiences.

Founded in the mid-2000s and organized by Kiki Slaytana, Nikki Queerlife, and the late Ria Pell, the festival’s line-up of queer acts from all over the map was an exciting breath of fresh air for the queer Southeast. Following Mondohomo’s footsteps are current conglomerates like the Sweet Tea variety show, Flakey Niece (a queer-friendly local alternative to Shaky Knees), and the Queer Youth Fest.

Now get ready for some Queercore. On Thursday, February 22, this aptly titled music series debuts at the Earl. With a showcase of five ATL-based musical acts, it aims to support the ongoing dialogue about queer participation in local music.

Bitter (top photo) is one of the strongest ATL indie bands on the scene right now. They’re an ATL four-piece making strides against a hetero cis male dominated industry. Their grungy riot grrrl nostalgia with Cuco at OYE! Fest linked them even closer to the Latinx community, something to which the group feels personally connected, says Bitter’s frontperson, Maritza Nunez.

“These songs may not be politically charged, but to be expressing myself in a society that constantly wants to restrict people of color’s voices, we are taking up space that is typically cis white male,” Nunez says. “It tells people like us, queer people, brown girls, any POC, they can do whatever the hell they want and express themselves through art or any form.”

And they’re appropriately named, too. With a sound that seethes in regret and wildness, Bitter’s music is so emotive, one could call them emo-punk. Nunez’s strong, soulful vocals and heartbreaking lyrics are complemented by the surf-y urgency of guitarist Nadav Flax. Both are solidly backed by bassist Haseena Peera and drummer Zo Chapman.

Solo artist Stone Irvin, aka Haint (albums, second from right), is also slated for Queercore with a performance of her avant garde labyrinth of math-rock dream-pop. The newest band on the bill, Blammo, is a three-piece post punk band that steers clear of overt emo inflection all together, noting influences of Delta 5, Kleenex, and other female-fronted discordant art-punk of the early 80s.

The concept of queercore music is no longer just for punk acts. It is about identity and DIY ethos, no matter what the genre or vibe. Each with a unique sound, the five acts slated for February 22 have all grown from a DIY standpoint, in spaces that might not necessarily share the same audiences, but that allow each to find ways to create and share their music. ATL is very lucky to have them on the scene.

This article orginally ran in Q magazine. Read the full issue below: