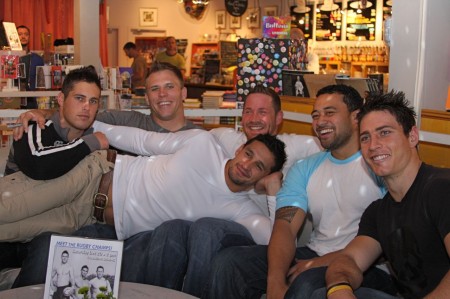 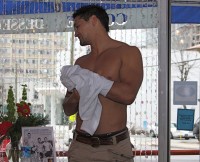 Who loves a winner?

The rugby team from Life University, which in June picked up the USA Rugby Men’s Division I National Championship, is now strutting its stuff on the pages of a new calendar for 2009. Six teammates — Nolte (January), Aaron (February), Ben (March), Nathan (July), Mark (November) and Kendrick (December) — popped into Outwrite Bookstore & Coffeehouse on Saturday and were good sports about pitching the “Div I National Rugby Champions” calendar. A portion of the proceeds from the calendar benefit Susan G. Komen For the Cure, which is a leader in the fight against breast cancer.

The black and white photos in the 12-month calendar don’t hold back. There’s a healthy helping of pecs and abs. Flip your way through to July and sexy New Zealander Nathan is pictured holding only a football. Scrum anyone?

Not to miss an opportunity to make some sales with the host of gay men in the crowd, which also included some straight female fans, organizers of the event convinced each of the players to peel off their shirts if someone bought two calendars per player. You’ve never seen 12 calendars sell so fast. And college rugby players look pretty good up close and shirtless. Nathan, ever so playful, was willing to show more to boost sales.

You can pick up the calendar at Outwrite or through the calendar’s web site. The rugby team, meanwhile, opens its 2009 season on Jan. 17.