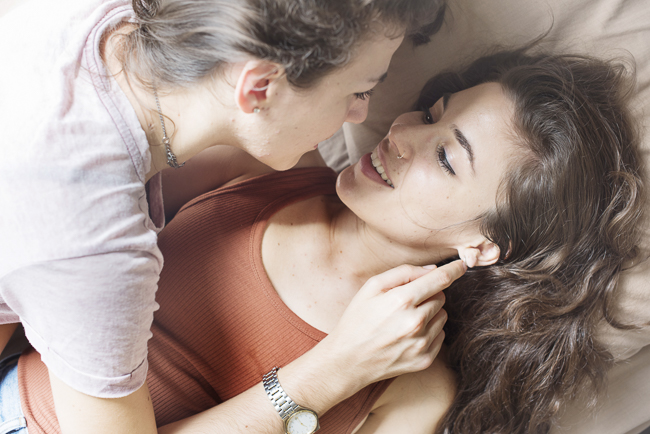 As a supplement to Q's own queer Atlanta sex survey, we went to some trusted sources for revelations specifically about lesbian sex.

Here's the scoop, directly from cis and trans-identified women who have sex with women.

About a third of respondents have sex multiple times per week, and about a quarter enjoy a partner or partners multiple times per month. Third place finds about 20% of female-identified queers who have sex with women have sex less than once a month. Feast or famine.

Female-identified queers orgasm during 75% of their experiences. Straight women only 62%.

A whopping 84% of lesbian sexual experiences last more than 30 minutes, a third of those over an hour, and most of them in every room of the house.

Some 66% of lesbian-identified females who orgasm at least once per sexual encounter are monogamous with one partner. Only half of non-monogamous ones orgasm every time.

Only about 40% of lesbian-identified women scissor as a regular part of sex. Oral and hand touch are far more common, with toys in third.

Lesbians who talk about sex regularly have an orgasm rate of 86%. Communication leads to better sex. Duh!

Nearly half of lesbians have never squirted, a third have, about 10% aren’t sure, and of those that do 85% do it almost every time.

Pick up a new edition of Q each week at queer and LGBTQ-allied venues around Atlanta.