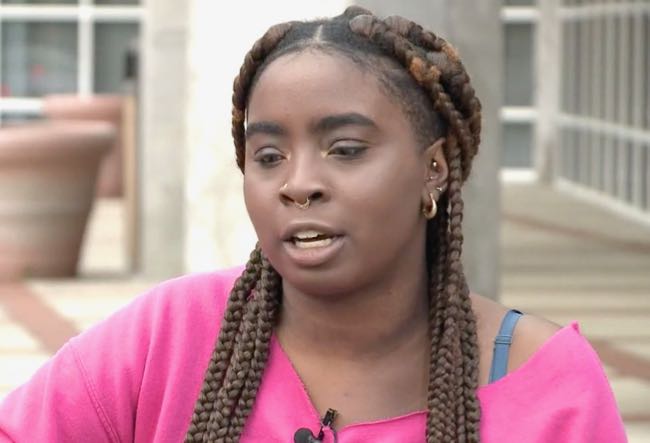 The president of the LGBTQ student group at Spelman College and her transgender partner were targeted with hateful anti-trans notes calling them “freaks” and telling them they aren't wanted on the campus of the Atlanta women's college.

The first note was slipped under the dorm room door of Amber Warren (top image) on April 2. Warren, a senior, is president of Afrekete, the school's LGBTQ organization. About two weeks later, on April 22, a second transphobic note was left under the door of Warren's partner, who is transgender.

One of the handwritten notes said, “Keep your tranny out of our bathrooms. Thanks!” The other read, “We don't want you. Fuck you freaks!” That note also had “Keep Spelman Safe” and “no queers” scrawled on it.

Warren told 11Alive that the notes were deeply troubling.

“I’m just hurt because I feel like I worked so hard to create safe spaces for everybody,” she said. “Even though I did all this work, it’s not about individuals, it’s really about unity.”

Warren said the notes show that Spelman still has work to do as it prepares to formally expand its admissions policies to accept transgender women for the 2018-19 academic year. The school became the second historically black women's college to embrace transgender female students when it announced the policy in November.

“I feel like it is going to be reactionary, it is not going to be proactive,” Warren told 11Alive of the policy change and the school's implementation of it.

In an Instagram post on Wednesday, Afrekete said the notes left LGBTA students “fearful for queer bodies on this campus and the many transwomen who are coming here with big ambitions and a false belief of finding a safe space here.”

In 2014, vandals littered sidewalks at Spelman and Morehouse with anti-gay slurs as the two colleges prepared to celebrate Pride.

Clearer picture of the second hate note for those who need to see it. Is this what some of our Spelman Sisters think of us? No Spelman Sister of mine. @spelman_college What's next? We want justice, not an email. We are fearful for Queer bodies on this campus and the many TRANSWOMEN WHO ARE COMING HERE WITH BIG AMBITIONS AND A FALSE BELIEF OF FINDING A SAFE SPACE HERE. #Spelman #spelman2022 #spelman2021 #spelman2020 #spelman2019 #spelman2018

On April 2nd, 2018. The President of Afrekete @awarxoxo got the first hate letter slipped under her dorm door in regards to her trans partner. The second note was slipped under her partner's door directly on April 22nd, 2018. LGBTQ FOLKs on @spelman_college campus are being targeted and enduring hate crimes! WE DO NOT FEEL SAFE.The VP's Email is about us @spelmanvpsa Please read these 2 letters of hate for yourselves AND please sign up if you want to help us. Share all photos if you want. We need numbers consisting of genuine supporters now more than ever. A link to the news coverage is in our bio @mcsafespace @emptyclosetcau @ascaffinity @spelmancollegerecwell @spelmancws