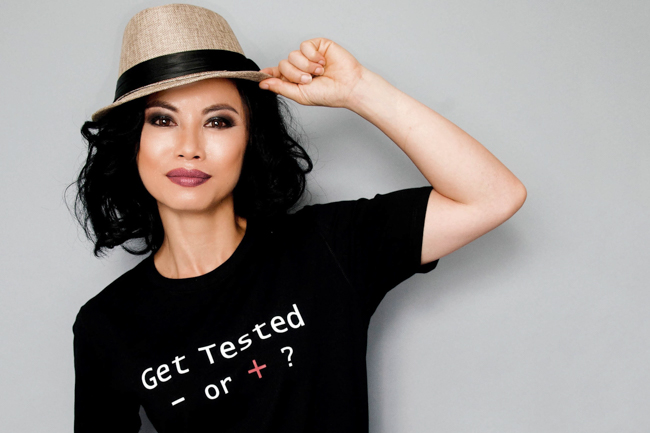 Amazin LeThi experienced bullying, homelessness and depression so severe that she contemplated suicide. But the Vietnam native found salvation through sports and became a competitive bodybuilder.

She continued that trajectory to become an internationally known LGBTQ and HIV/AIDS activist. LeThi will share some of her life’s journey on a panel on LGBTQ inclusion in sports during the Atlanta Women in Sports Luncheon on Jan. 31. Queer state Rep. Park Cannon moderates the discussion taking place at The Porsche Experience Center.

And it’s all just in time for Super Bowl Week at Mercedes-Benz Stadium on Feb. 3.

“You’re always trying to find a sense of community and where you fit in,” LeThi told Q. “We spend our entire lives trying to fit in. Sports became my haven, because it was something that I could do. I wasn’t necessarily judged by who I was. It was more about my ability as an athlete.”

LeThi was shorter and thinner than other kids her age, which led to her getting teased. She tried tennis and softball, but they didn’t change her physical appearance.

Then she found what she was looking for.

“I was fortunate enough to have dumbbells where I was living,” she said. “Someone mentioned that I should start weight training. I loved bodybuilding because it was something I could do alone.”

And it definitely changed her physical appearance. By her teens, Le Thi was competing in bodybuilding, then she qualified as a strength and conditioning coach. That led to writing numerous health and fitness books.

“It really gave me a very different perspective in terms of how women are seen in sports,” she said. “And I didn’t think I would have that perspective if I were in athletics or tennis.”

But LeThi found herself wanting to do more, especially coming from her perspective as an LGBTQ Asian, or as she prefers to say, “part of the rainbow community.”

“In Vietnam, we use the word ‘rainbow,’ because we feel it’s far more inclusive than LGBT,” she said.

LeThi is determined to increase the visibility of that population in the U.S.

“Many Asian-American people, especially in the South, are first generation immigrants, so they have this dual identity that you have to have, which is very tiring for the person,” she said. “You could be out in your American life but not out in the Asian community.”

Media portrayals of LGBTQ Asians are lacking as well, she said.

“If you’re struggling to come out as an Asian person, if you don’t see yourself generally, and if you only see white and black LGBT storylines, there’s that feeling — especially if you’re young — that being LGBT is not for you,” LeThi said.

She specifically noted the ground broken by state Rep. Sam Park when he became the first openly gay man and first Asian-American man elected to the Georgia legislature.

“It’s so important that we have people like [Park], because that presents such a positive image to the LGBT Asian community,” Le Thi said. “We’re the fastest growing community in the South, but we’re also the most invisible.”

From HIV ignorance to activism

LeThi admits that she didn’t know anything about HIV and AIDS when she was younger. An incident during that time moved her to action.

“I worked in the entertainment industry, and I went to a radio station and was told that someone living with HIV was coming to the meeting,” she said. “There was one seat left, and I remember lifting that seat up and sitting as much as I could away from that person. I just saw this look in their eyes where they didn’t even flinch. And I thought, ‘They must go through this all the time.’”

She educated herself on the issue, finding how prevalent HIV was among Asians. The Harvey Milk Foundation referred her to be a guest speaker at the NPS Italia Onlus HIV/AIDS national summit in Milan, Italy in 2012. The press coverage led her to be the first Asian HIV/AIDS activist on the cover of Real Life — Italy’s national HIV/AIDS publication.

“If I have a platform, I should raise my voice about these issues that affect us in society,” LeThi said. “I think it goes hand-in-hand within the rainbow community, because we do have a high rate of HIV. It’s important that we have wider conversations about other issues because people living with HIV suffer a terrible amount of discrimination and stigma.”

LeThi has been visiting Atlanta more and more often in her work.

“As an advocate, it’s very easy to go to the East or West Coast, but that market is very congested,” she said. “There are issues with being LGBT and bullying and racism there, but if you really want to change America, you have to go to the South. This is where for the most part all the anti-LGBT laws are in place or pending.”

When Le Thi spoke to homeless shelters in different parts of the country, she found out that our region is an epicenter for homeless LGBTQ youth.

“They said they were coming from Georgia and North Carolina, and I said why wait for the youth to come here when I can just go there?” she said.

She also cited the number of out LGBTQ politicians in Atlanta, plus the presence of the Center for Civil & Human Rights (and within that, The LGBTQ Institute).

“I thought this is where I would be able to make the most progress and impact for not just the rainbow community, but also the Asian community as well,” she said.

Amazin Le Thi speaks as part of the LGBTQ inclusion in sports during the Atlanta Women in Sports Luncheon on Jan. 31 at The Porsche Experience Center, 9:30 a.m. – 4 p.m. More info atsportsunlimitedenterprise.com.

A version of this article originally ran in Q magazine. Flip through the latest edition below.

UPDATE | The location of the Atlanta Women in Sports Luncheon changed from The Gathering Spot to The Porsche Experience Center. The article has been updated to reflect that.