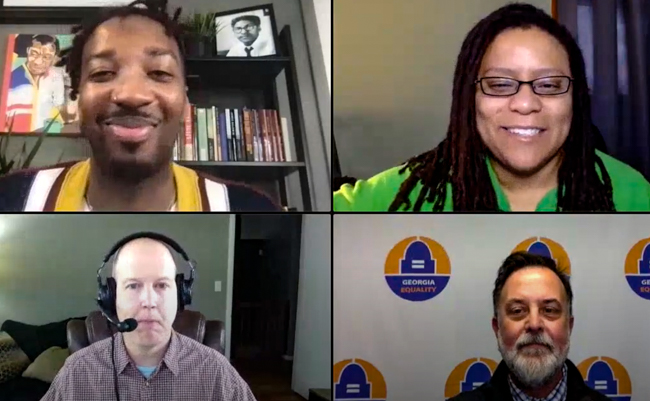 “As the U.S. Supreme Court and some other courts have gotten much more conservative, we can no longer rely on the courts to protect our rights,” said Jeff Graham, executive director of Georgia Equality.

“If we don’t have both chambers of the Congress that are willing to at least debate LGBT issues, our rights not just as Georgians, but the rights of the LGBT community around the country, will continue to be put on hold, and de-prioritized — regardless of how supportive the president may be,” he added.

Fields and Jackson echoed Graham’s sentiments about the stakes of the U.S. Senate races. They outlined the commitments to equality by Democratic challengers Raphael Warnock and Jon Ossoff, contrasting them with the anti-LGBTQ records of their Republican opponents. Warnock and Ossoff face incumbent U.S. Sens. Kelly Loeffler and David Perdue, respectively.

“Rev. Warnock has committed his life, really, to fighting for and supporting items such as the Equality Act to protect members of the LGBTQ community from housing, financial and employment discrimination,” Fields said.

“He’s advocated for gender inclusion, inclusive policies and resources that would help at-risk LGBTQ youth who face higher risk of homelessness and other challenges,” Fields added. “And he pushes to ban discriminatory federal practices that stop trans folk from serving in our armed forces.”

“Let’s not get it twisted,” Jackson added. “Loeffler does not support our community. Let’s just be clear about who’s side Kelly Loeffler is on, and it’s not on our side.”

“We’re going to end up our campaign with about $950,000 that we will have raised and spent to mobilize members of the LGBT community and our allies throughout the state of Georgia,” Graham said. “And we know that that is already working.”

About 350,000 LGBTQ and equality voters had cast a ballot in the runoffs by Dec. 28, Graham said.

“That is well over half, getting close to two-thirds, of the folks that we targeted through our campaign have already voted early.”

The resources funded a multi-pronged effort with in-person volunteers, phone and text banking, and direct mail. Jackson credited Georgia Equality’s efforts during the election, as well as for positive implications for LGBTQ voters going forward. GE “put us on the map,” she said.

“For so long, when people were putting together their statistics around voting blocs – they talk about the black voting bloc, white women, soccer moms – but very rarely have they talked about LGBTQ folks,” Jackson said. “We have not been considered a bloc to garner support.”

“Because of the work of Georgia Equality and so many others, people are seeing that our votes matter, and that they’re worth fighting for and getting us to go out to vote,” she added. “They are naming that queer folks exist in the South, and we have power in our vote, and if you turn us out, we can make real positive change in Georgia.”

Graham said roughly seven percent of voters identified as LGBTQ in exit polls for the general election in November.

“I myself was a little surprised,” he admitted. “Actually seven percent is roughly the same percentage of voters who identified as Latinx.” 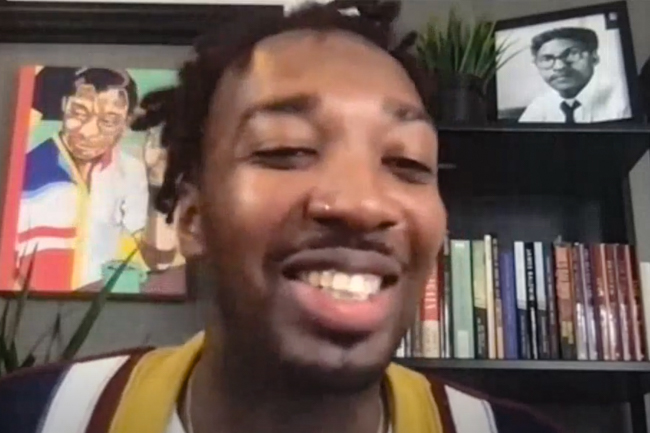 Fair Fight is spending large sums on voting as well. In addition to court battles against efforts to disenfranchise voters, the organization raised $23 million on voter registration and turnout in just the three weeks ending on Dec. 16 alone.

“We and other allied organizations have built and scaled up the necessary infrastructure to help elect these two men,” Fields said. “We have a multi-million dollar investment in local organizations.”

“We’ve also committed to meeting voters where they are, and giving them the tools and information they need to make their voices heard,” he added. “This is not just about our organization, but about the people whose lives will be directly affected by the outcome of this election.”

Finding new ways to engage new voters is also part of the efforts at Fair Fight. They hosted a Rock the Runoff virtual concert and tapped the support of TikTok artists and Instagram influencers. The organization also donated to scores of organizations working on voter turnout and education, including a grant to LGBTQ-focused Southerners on New Ground and $50,000 to Georgia Equality.

The groundwork and connections Fair Fight built in this election cycle will help continue the organization’s community involvement and voter education, as well as its fight against systemic voter disenfranchisement, well after the runoffs.

“If we didn’t have Fair Fight, the rest of us would be scrambling to do this, and the voter suppression would be working,” Graham said. “We have been incredibly successful at pushing back against that. The integrity of this specific election cycle has probably been the highest in Georgia history, so folks really need to take comfort in that.”

Jackson takes the same support system into her first term. When she is sworn into office as the state’s first openly LGBTQ member of the state Senate, she faces a divided state and legislature in many ways.

“I know that ahead of me is an uphill battle to make sure that we preserve our access to the ballot box and access to no-excuse absentee balloting, which is on the chopping block right now,” Jackson said. “My goal is to find those Republicans who understand what it means to protect this democracy. I do believe they exist.”

“As someone who lived for many years not ‘out,’ I know how to have conversations with people who aren’t ready to be public about what they feel and what they believe,” she added. “I’ll start by doing that work of just building those alliances and those allegiances.”