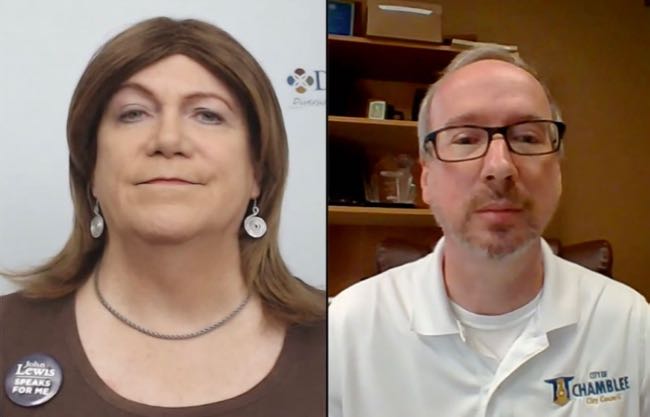 The Doraville City Council passed a mask mandate on July 13 that covers all public places and includes exceptions for churches. Kemp issued an executive order banning such mandates two days later, then sued the City of Atlanta over its mandate and other efforts to contain the virus.

Koontz (top photo left), the council’s first-ever transgender member and the city’s mayor pro-tem, said it was “ridiculous” for the state to prevent Doraville’s efforts.

“As far as I understand, our mandate is still in place and I have no interest in lifting it,” she said. “I’m not sure when this will ever go away if we don’t start behaving like adults.”

“He also doubled-down on his claims that he can invalidate mask mandates – a power the City of Doraville and many other local governments do not believe he has,” Geierman said in a statement on Monday. “We would like to remind everyone that our mask mandate remains in effect within the city limits of Doraville.”

Geierman told Project Q on Tuesday that he’s not aware of any citations being issued to residents for violating the city’s mandate.

Mock (top photo right) said Kemp is causing confusion in the midst of the pandemic.

“When the state is saying one thing and your locally elected officials are saying something different, it certainly doesn’t help the cause,” Mock said. “The governor has really put us in a very awkward situation more than once this year with these types of situations.”

The Chamblee City Council passed a resolution in July that asks residents to wear a mask, Mock said.

“At some point I think we will have a mandate out there, but right now we’re just asking everybody to do the right thing,” he said.

Kemp’s spokesperson Cody Hall told Project Q that the state has adopted a number of safety guidelines to fight the pandemic.

“Locals have been empowered to enforce [the guidelines] for months,” Hall said.

Mock knows firsthand the effects of coronavirus. He said he updated his will because he “was worried about whether there was going to be a tomorrow” after contracting the disease in May.

“It’s hard to talk about because there was a point that I really wondered if I was going to be able to get up the next day,” he told Project Q Atlanta.

Mock was out of work for five weeks and in bed most of that time due to the infection. And the damage isn’t done.

“I’m still seeing a lung doctor every week,” he said. “I have about 40 percent lung damage that they’re just wondering if it’s going to be long-term or short-term.”

“It’s been life-changing for sure,” he added.

Koontz has been sheltering in place since March.

“It’s starting to feel like just being under house arrest for people not doing what they need to do to make this end,” she said. “And I think if people had followed some pretty simple guidelines earlier this spring, we would already be past this and life would be getting back to normal.”

Mock said the mask issue shouldn’t be about politics.

“This is not about the left or the right and who’s right or wrong in regards to their politics — this is about science,” he said. “Let us do our jobs. Let us protect our citizens and let us protect ourselves.”