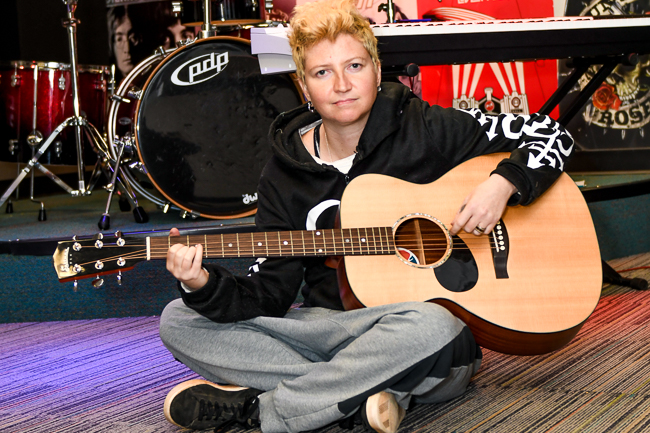 When Atlanta needs a music mentor to guide its youth, they go to Notes for Notes. That’s the non-profit where Jen Hodges serves as the education and outreach specialist who offers free music instruction and recording studio space out of the Whitehead Boys & Girls Club.

The Winston-Salem, N.C., native chatted with Q about her work and her inspirations.

What kind of kid were you growing up in Winston-Salem?

I was super shy in elementary school until embracing my inner weirdness in middle school. I played sports, music, and I loved to draw. I became extroverted in high school. I was in a band and had no sense of fear. I wanted to be a rock star and cared little for school.

I was mischievous, a bit bored, and wanted to get out of my town.  Yet when the opportunity presented itself, I was hesitant at first. Eventually, I decided to take the challenge, move to Boston and attend Berklee College of Music.

What inspired you to take up playing bass?

Around 9 years old, I heard [Red Hot Chili Peppers bassist] Flea on the radio. I wasn't sure what instrument he was playing, but I fell in love with it. I shortly found out he played bass and asked my parents to get me one.

At nine, I was about four feet tall and weighed all of 50 pounds. They weren't discouraging, but they were a bit hesitant to commit to purchase an expensive piece of equipment that was twice my size. So they rented me a right-handed three-quarter bass. I flipped the bass upside down (I am left-handed) and learned it that way. I learned every Chili Peppers record and started playing locally in coffee shops with my instructor by age 12. I played in a Led Zeppelin cover band in middle school and then a grunge punk band in high school.

How did Notes for Notes come into your life?

The company I was working for at the time decided to switch from the music industry to a penny day trade company. I'd come in early and search job boards after that switch. I found Notes for Notes on Craigslist.

I had never worked with youth before but decided to give it a shot. I came in and jammed with a group of third graders on some Stevie Wonder. It was the coolest experience ever! I was hooked. Thankfully, I got the job and haven't looked back since.

What inspires you about the work?

The youth inspire me every day. They are constantly changing and growing. It is exciting to be a part of their lives. Each youth is unique. Bringing all these diverse youth together with the commonality of music is what makes the studio so special. The playing field is level here. Everyone gets along and contributes to make the best possible art they can.

By the way, the music they create is quite good. I get very invested in the creation process. We've had youth start their careers in here. I have one youth who makes a living touring the Southeast now. I had one sign a producer deal. I've had youth play Bonnaroo, go on to music colleges, and sign record deals. It's the perfect atmosphere with positive energy, creativity and challenges every day.

Do you get many queer kids coming through the program?

One of my first artists was queer, and I haven't seen any come through since. At least they haven't elected to identify as such. I'd love for that to change.

What’s your most memorable story about the kids at Notes for Notes?

Most recently, we had rising Atlanta rapper Domani Harris come in to record a session with 10 of my most talented youth. Papa John's catered the event and wanted for Domani and the youth to write a song using the theme “Better Days.” Everyone broke up into groups to figure out how they fit into the song.

The producers had to learn how to give and receive constructive criticism from each other in a time-limited session. You could hear them try to sugarcoat some suggestions, and you could see egos breaking up in the process. It was powerful. They grew as artists and as people in real time, and got the beat sounding hot.

Next it was the instrumentalists and vocalists turn to write. Our producer came up with a fire hook. Everyone took to it pretty quickly, and the dam broke. People were hopping in and out of the booth. Verses were recorded. Guitar parts got laid down, and the song came together.

In the process of serving the music, some parts were shortened a bit and some were lengthened. This was another instance where egos started being shed. Most of the youth were used to being the best player in the room. This was their first experience with other players just as talented as them, so if their part was shortened, I had to explain it was not shortened due to any type of bias or competition. I explained that every part has its place in the whole picture to best serve the song being crafted. This was a valuable lesson a lot of folks don't learn until later in life.

In this real-time experience listening and creating under a deadline and learning to serve the music, they created a masterpiece that Papa John's loved so much, they invited the group to perform it at their grand reopening with Shaq in attendance. At this point, the group had become very tight knit and were ecstatic at the proposal.

On a record-breaking hot day in August, 10 youth from the studio performed in front of hundreds of people with Domani and Shaq a song that they had created all by themselves. It was a once-in-a-lifetime experience. One of my youth told me it was the highlight of his entire year by far. They knocked it out of the park. I was so proud of all of them, they all have such bright futures ahead of them.

If you could have dinner with any three people ever, living or dead, who would it be and why?

David Bowie, Flea and Stephen Hawking to find the intersection between art and science. Also to get their perspective on the best way to go about rule breaking. All three of them push boundaries and were rewarded rather than punished for it. Bending the rules is an art form in of itself. Sometimes it's necessary for human development. Perhaps there is an intersection between all three of these ideas. I admire these three for their creativity and bravery. I'd be interested to weigh similarities and differences between their approaches to their work and life.

A shorterversion of this article appeared