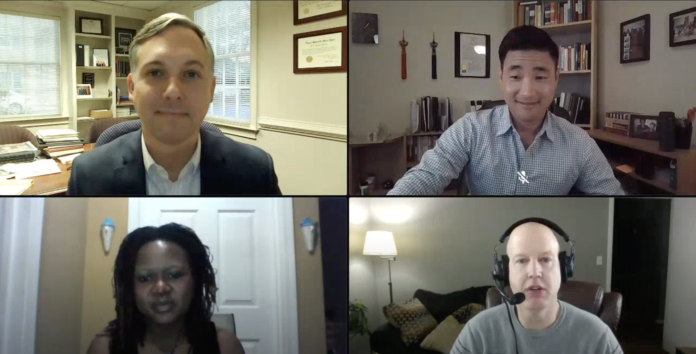 When the Georgia legislature gaveled into its 2021 session on Monday at the Gold Dome, a record number of LGBTQ lawmakers swore their oaths with promises to put queer issues on the state’s agenda.

Three of them help set the agenda in a live conversation last week.

“We are going to be fighting to make progress on every single one of these issues, because LGBTQ Georgians are Georgians,” said state Rep. Sam Park (photo, top right), who became the state’s first gay male and first Asian state legislator in 2017 and is returning for his third term.

“As lawmakers, we are going to be fighting to pass laws that benefit and protect all our communities,” he added. “We have to stand firm on our values, to encourage folks, especially LGBT folks, that there are people who represent them who are fighting for their best interests.”

The trio are among a record-breaking seven LGBTQ legislators in Georgia. During the Project Q event, they placed comprehensive civil rights legislation, HIV decriminalization and banning conversion therapy high on their priority lists for the session.

Cannon was elected secretary of the Democratic Caucus for the session. Among LGBTQ issues on her 2021 goals, she wants to roll LGBTQ families into some broader family bills, and to also make PrEP more accessible and affordable as an HIV preventative.

“Unfortunately, there’s been so much red tape and strife and lawsuits that we want to make [PrEP] as accessible as possible,” Cannon said. “We need $400,000 for our pre-exposure prophylaxis program to go statewide, and we just don’t yet have that funding by the speaker, and by the majority caucus.”

Also on the LGBTQ agenda, Park is tackling archaic laws that criminalize HIV transmissions. Wilson is eager to ban conversion therapy practices in Georgia, and both he and Cannon are working to ease the path to gender-affirming legal documents for transgender people.

“I’ve been working with some key supporters and advocates in the offseason,” Wilson said of the conversion therapy ban. “We’ve identified some Republican supporters who are helping us privately right now, and we are urging some public support.”

Working for bipartisan support came up time and again during the Q Conversations event.

After the state’s first LGBTQ-inclusive legislation ever came in a broadly supported 2020 hate crime bill, the lawmakers are hopeful.

“We already know what the fight feels like,” Cannon said. “Last year in passing the hate crime bill, we were able to receive status recognition as the LGBTQ community and figure out ways that we can find protection, even when the dominant narrative was that the hate crime bill will only support issues of race or religion.”

None of the legislators was aware yet of any anti-LGBTQ bill. Last year, they blasted a lawmaker’s “hateful” ant-trans rant and criticized a “free speech” bill for discriminating against LGBTQ students. They also opposed efforts to allow adoption and foster care agencies to refuse to serve LGBTQ people.

In addition, some cultural behemoths are also on the legislative agenda after a contentious national election season. Georgia Republicans promise to entertain changes to voting laws that Democrats see as suppressing votes, and this is a redistricting year.

“In terms of advancing our legislative agenda and stopping harm, that will require us to work with Republicans where we can, find common ground where we can, especially in this very challenging political moment in our country’s history,” Park said.

“Going into my third legislative session, the only certainty about the legislative process is uncertainty,” he added.

Watch the full Q Conversations episode above. Catch up on past episodes, and click the timestamps below to jump directly into individual topics.

[1:47] On the historic election of state Sen. Kim Jackson

[4:34] The challenge of Democrats in a GOP controlled House

[9:47] Hope for passing a conversion therapy ban in Georgia

[28:28] Safety against any physical threats at the Gold Dome

[30:30] Potential of elections bills and redistricting to consume the session

[38:38] Chance to improve mental health services in the state