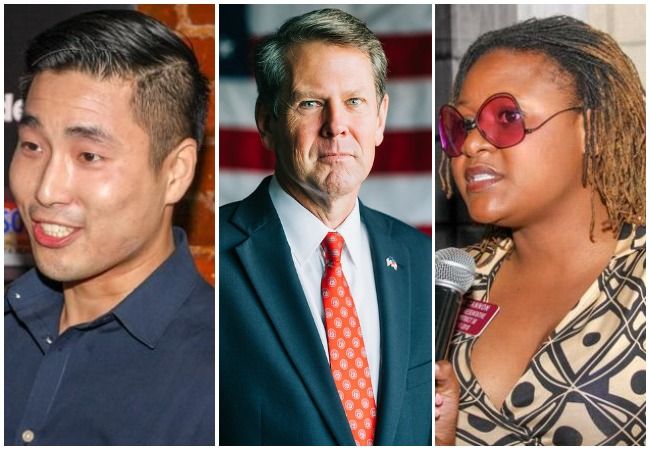 State Reps. Park Cannon (photo right) and Sam Park (photo left), two of the five openly LGBTQ lawmakers in the legislature, were part of the group who signed an open letter to Kemp (photo center) about his appointments in July.

The lawmakers praised the “remarkable accomplishments” of Kemp’s appointment to state boards, but they were troubled by a January press release that listed 14 white senior aides, according to the AJC.

“Most certainly, there are qualified applicants among the approximately 5 million people of color in Georgia to have a seat at the decision-making table in the highest office in the state,” they wrote. “It is our hope that any sincere efforts to increase diversity in your administration would also extend to your immediate staff.”

“Without a staff representing the diversity of Georgians and their experiences, you deprive yourself of the opportunity enact policies that will improve the lives of all Georgians,” they added.

Kemp officials did not respond to the letter, but previously said that the January press release doesn't include three other diverse hires, according to the AJC.

Kemp filled some 80 positions to state boards and criminal justice posts with a diverse slate of people as of June, including at least three LGBTQ appointments. Women accounted for about half of the appointments and African Americans for about a quarter of them, according to the AJC.