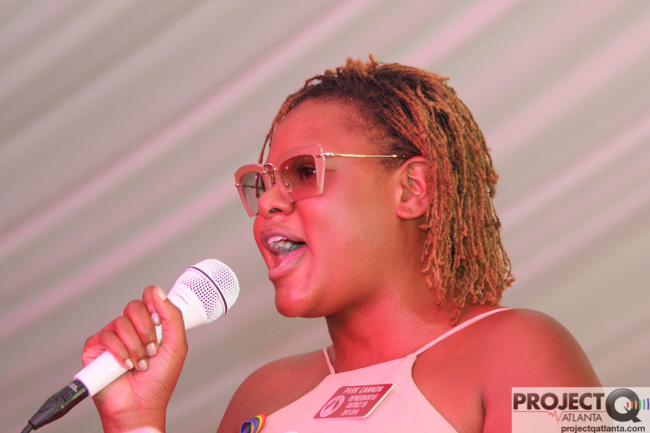 State Rep. Park Cannon – one of four LGBTQ lawmakers in Georgia – says she was berated and blocked from exiting a room by Atlanta police and WABE officials when she tried to introduce herself to Congressional candidate Karen Handel.

The incident took place Thursday after a debate between Handel and Jon Ossoff at WABE's studios in Midtown off Cheshire Bridge Road near Piedmont Avenue. Cannon – wearing her maroon name tag identifying her as a state lawmaker – said she approached Handel to introduce herself. She wanted to offer assistance on LGBT issues if Handel wins the June 20 runoff against Ossoff for Georgia's 6th Congressional seat.

Handel refused to speak to Cannon and “scoffed at me,” the lawmaker said.

“She immediately turned her head and walked away,” Cannon said. “It was without understanding that I am here as an openly queer millennial Georgian who is also a state representative to make positive change. I want to share my resources with anyone who is running for office to better understand the LGBTQ community.”

In a Facebook post describing the incident, Cannon said a WABE staff member and Atlanta police officers then interjected and made the situation worse.

“I told her great job and that if she is elected, I look forward to working with her. Additionally, that I am a part of the LGBTQ community and her statements on gay marriage and adoption affect many Georgians. Immediately, two APD officers were called on me by a white, male WABE staff member. I was blocked from exiting a door and berated in the parking lot.

Cannon, visibly shaken while discussing the incident with Project Q on Sunday, declined to detail what actions the Atlanta police officers took. But she called on Chief Erika Shields – the city's first openly gay top cop – to improve the agency's approach to dealing with LGBTQ people.

“I am hopeful that Chief Erika Shields will continue to do what she can to support the LGBTQ community and that means that when officers are involved there is a level of sensitivity that must be fundamentally of the work that our police officers do,” Cannon said.

Cannon said she has been in contact with Atlanta police and officials at WABE. But Handel's campaign has not responded.

“At this time we are making sure that Chief Erika Shields knows that the work that the Atlanta Police Department does must be LGBTQ sensitive,” Cannon said.

An Atlanta police spokesperson said the agency does not have a report of an incident at the station and did not respond to additional questions about what took place.

WABE officials declined to discuss the incident but issued this statement:

WABE held a debate with the 6th Congressional District candidates in order to help inform the public about the views and issues that affect their community.  It was our agreement with the campaigns that there would not be an audience Q&A after the debate. Based upon this agreement, all audience members were asked to remain in the studio until the candidates had left.  WABE also agreed to provide security for the candidates while they were on premises, and for this reason several Atlanta Police Department officers were on site.

We were honoring the security protocols established with the campaigns.  WABE staff escorted Secretary Handel from the studio to the front door and asked for assistance from an officer when an audience member (whom we later learned was Representative Cannon) followed rather than remaining in the studio as requested.  The actions we took were consistent with what was communicated to the candidates and the audience, and was by no means an effort to suppress the views of Georgia State Representative Cannon.

Cannon said she abided by the station's rules during the debate by staying within the area for audience members and remaining quiet.

“We have seen WABE respond by saying that there were specific security protocols set in place by both campaigns and I don't deny that that is absolutely true. As we try to keep people who run from office safe on the campaign trail, sometimes we do have those protocols in place. But it is very clear that someone overstepped their boundaries and that should not have happened,” Cannon said.

Cannon said the incident is reflective of efforts to silence LGBTQ voices – even those of an elected public official like her.