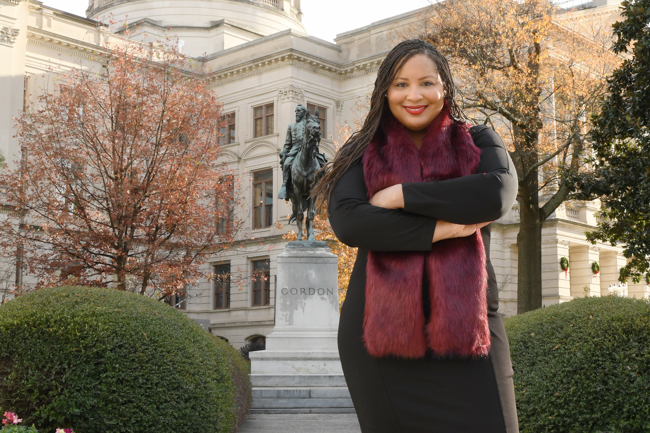 Georgia state Rep. Renitta Shannon launched her campaign for lieutenant governor on Monday, setting the stage for what would be a groundbreaking election in the state.

“Georgia has over the years failed to expand Medicaid, resisted stopping mass incarceration, resisted paying workers a living wage,” Shannon told Project Q Atlanta after her announcement. “I’m a proven progressive fighter and I’m willing to advance and fight for the policies I’ve talked about.”

The lawmaker, 41, would be Georgia’s first openly LGBTQ lieutenant governor and first Black woman ever elected to statewide office in state history. She wore a t-shirt saying “Black & Proud” in rainbow colors in her campaign launch video (below).

She is currently one of seven LGBTQ lawmakers in Georgia’s legislature. Elected to House District 84 in Decatur in 2016, she came out in 2017 on the eve of National Coming Out day that year and marched in the Atlanta Pride parade a few days later.

As an incumbent, the lawmaker faced no opposition in the 2018 and 2020 elections. She is scheduled to leave the legislature in 2023.

The primary for lieutenant governor is in May. Shannon’s opponents in the Democratic primary include gay political strategist Kolbey Gardner, who made his case for the post with Project Q earlier this year. The primary also includes Shannon’s fellow state Reps. Erick Allen and Derrick Jackson, as well as physician Jason Hayes, entrepreneur Ben Turner and nonprofit leader Bryan Miller.

Since taking office in 2017, Shannon boycotted Gov. Brian Kemp’s first major speech as governor-elect in 2018. She said Kemp ran a “campaign of hate” that targeted voters of color, immigrants, women and LGBTQ people.

In 2019, she called an abortion ban that the legislature passed a “death sentence” for Georgia women. She also introduced a bill that would require law enforcement agencies to report use-of-force incidents to a public database and co-sponsored a measure that would ban conversation therapy for minors in Georgia.