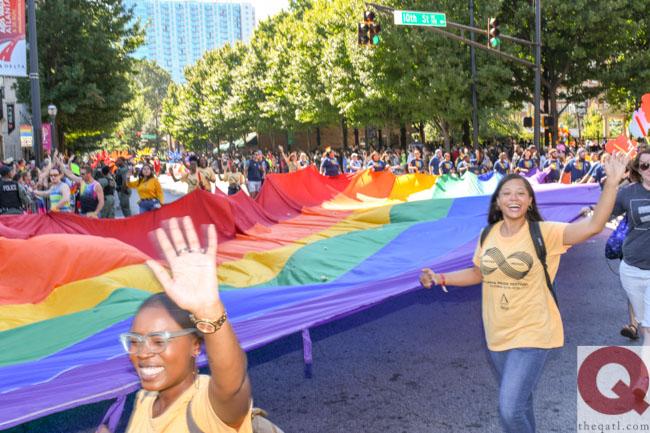 LGBTQ Georgia residents are younger, make less money and are more likely to be unemployed than their straight counterparts, according to a new study.

The report from the Williams Institute at the UCLA School of Law, released March 5, also showed that 4.5 percent of Georgia residents are LGBTQ. Georgia has the 17th highest percentage of LGBTQ people in the nation.

The study also showed that LGBTQ people in the U.S. are more racially and ethnically diverse.

“These findings remind us that LGBT people are young and old, people of color and white, they are parents, and they live in every state of the union,” said Kerith Conron, the Blachford-Cooper Distinguished Scholar and Research Director at the Williams Institute, in a press release. “Most LGBT people are not wealthy, and in fact, many LGBT people are low-income and are experiencing food insecurity. At minimum, policy-makers and service providers should work to ensure access to safety net program and services for LGBT people.”

A quarter of the LGBTQ population in the Georgia has children, according to the study.

There’s a gender disparity among Georgia LGBTQs, with 57 percent of them identifying as female and 43 percent as male. Fifty percent are white, 28 percent are black, 11 percent are Latinx, 8 percent are more than one race and 4 percent classify as other.

LGBTQ people in Georgia have achieved similar levels of education as non-LGBTQ residents, but they are more likely to be unemployed (nine percent for LGBTQs vs. six percent for non-LGBTQs), uninsured (20 percent vs. 16 percent), food insecure (26 percent vs. 17 percent) and have an income below $24,000 (26 percent vs. 21 percent).

Nationwide, Washington D.C. had the highest percentage of LGBTQ people (9.8 percent) and North Dakota had the lowest (2.7 percent).

Check out the full Williams Institute report on LGBTQ data and demographics here.