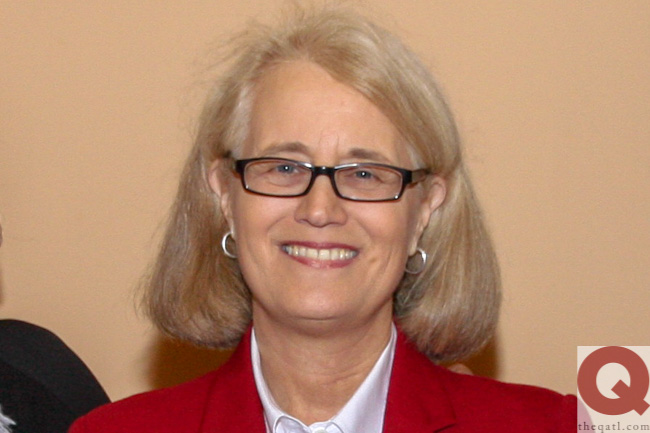 Drenner (top photo) — the first-ever openly LGBTQ person elected to the Georgia legislature — called the attack on Smollett “unacceptable” in her comments from the well of the House floor during Wednesday’s legislative session. Two people reportedly yelled racial and homophobic slurs at Smollett then assaulted him, threw bleach at him and wrapped a noose around his neck early Tuesday in Chicago, according to the Washington Post.

“Thought is an important concept in the prosecution of criminals,” Drenner said. “What were the thoughts of those individuals that assaulted Jussie Smollett as he was walking out of Subway?”

She asked if the attack on Smollett could have been because of his acting ability or because the perpetrators didn’t like his show “Empire.”

“No. The thoughts that they were thinking were illuminated in what they said,” Drenner said. “They shouted racial epithets and anti-gay comments at him as they threw bleach on him and placed a noose around his neck.”

“Regulating actions that are predicated on hateful thoughts is not something new. What is new is saying or legislating that beating up a black gay man is unacceptable,” she added.

“Mr. Speaker, I’m asking that this body continues the conversation on how thoughts influence crime,” she said.

A hate crimes bill that would protect people based on sexual orientation and gender – but not gender identity – made it out of committee last year but failed to get a vote before the full House. That bill included language from a hate crimes measure introduced by state Rep. Meagan Hanson, a Brookhaven Republican who was ousted from her seat by gay attorney Matthew Wilson in November.

When Ralston was asked Jan. 10 about the chances of getting a hate crime law on the books this year, he said Hanson “did a great job on that last session” but he wasn’t sure who would sponsor a bill this year.

“I wouldn’t be surprised if somebody introduced a bill,” he said.

Drenner is in her 10th term representing House District 85 in Avondale Estates. She was elected chair of the DeKalb County House Delegation on Tuesday, according to the AJC.