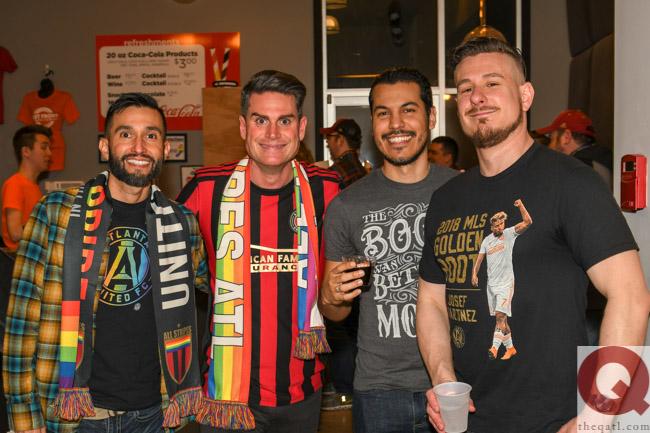 As Atlanta United’s third season approaches, the team’s LGBTQ and allied fan group All Stripes has a lot to live up to in 2019, but they stand ready to (slide) tackle it all.

Last season, All Stripes had nearly 400 paid members, hosted 20 tailgates and 19 watch parties, and raised about $6,000 for charity. Oh yeah, and their team took the league by storm and won the MLS Cup in our home stadium.

The group is already revving up support in advance of the March 10 home opener in Atlanta, and there’s much in store for 2019, according to All Stripes President David Prophitt (photo, second from left).

“The first thing is we’re planning on having more ticket blocks,” he told Q.

“We plan on going match by match and based on availability, doing another block of tickets as close to the original block as we can,” Prophitt said.

“This year, we plan on not only fundraising but putting man hours into projects like fielding a team for a ‘Soccer in the Streets’ tournament and finding other opportunities where local groups need our people power,” he said. “Our goal is going to be to keep our philanthropic activities as close to our mission as possible, so either LGBTQ+ or soccer related.”

It helps that the group now has a full board of directors and at least five active committees to help make it all happen.

If a recent season kickoff party the group hosted is any indication, All Stripes is about to get bigger and better. They had a sizable turnout, and to familiarize people with the game, the party included a Soccer 101 session led by local pro soccer player Adam McCabe.

The group hopes to hit a major goal this season: to become an official supporters group for Atlanta United. It’s an honor only four groups have so far, and it comes with benefits.

Supporters groups receive access to away-game match tickets, direct access to the club leadership and more, but All Stripes can only get that designation if they bring on even more members.

About 200 have signed up so far for this season. Membership includes the group’s member-exclusive scarf, discounts on food and drinks at the tailgates, access to purchase tickets in the group’s ticket blocks, and voting powers for all general membership decisions.

“We’re just overwhelmed by the response in 2019 with the number of new members that are coming out and are very excited about this season and our growth,” Prophitt said.

The fit-starts of spring weather and a fresh season of Hotlanta Softball League were a fitting pair for Midtown Moon on Saturday. That's because...
Read more
Nightlife