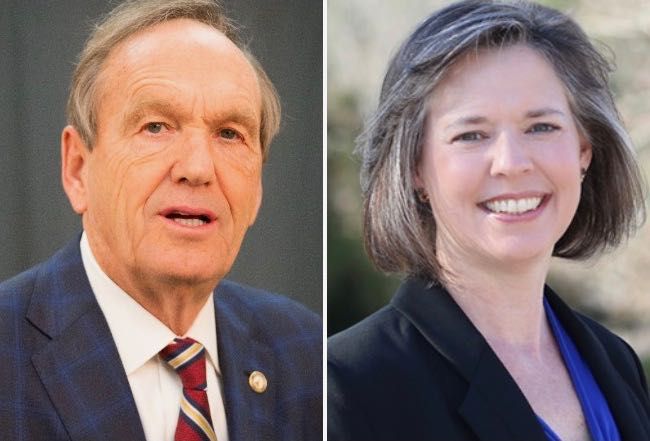 Former state Rep. Sally Harrell reentered politics this year driven in part by the urge to protect her teenage daughter, who recently came out as LGBTQ.

“So [LGBTQ rights] issues have hit us personally at home,” Harrell said. “I would support these issues anyway, but it makes it that much more intense to have a family member who is and will be affected by the decisions that are made on these issues.”

Harrell served in the House from 1999 to 2005. She was one of only a handful of Democrats in 2004 to vote against a constitutional amendment defining marriage as between one man and one woman — and she has the shirt to prove it.

“I have in my possession one of the Georgia Equality ‘I had a backbone SR 595’ t-shirts,” she said. “I felt strongly that voting against SR 595 was the right thing to do and consistent with my values. I cast my vote proudly, knowing that it might cost me my re-election.”

“Though I ended up not running for re-election due to redistricting issues, I wanted to be on the right side of history,” she added.

Georgia lawmakers passed the gay marriage ban and put it before voters, who overwhelmingly supported it. The state law ban was overturned when the U.S. Supreme Court legalized same-sex marriage in 2015.

Harrell spent the time out of office raising her children. After flirting with a run in the 2017 special election for Georgia’s 6th Congressional District seat, she’s now focused on the state Senate seat to reenter politics.

Harrell is one of a slew of female candidates nationwide inspired to run after the election of President Donald Trump.

“When Trump was elected in 2016, I was at the point where I was reevaluating going back into the work world,” she said. “Then Trump won and it was devastating for everyone, including me and my family.”

“It was a good time for me and my family to get back in,” she added.

Harrell closely followed anti-LGBTQ adoption legislation, known as Senate Bill 375, during this year’s legislative session, “partly because my opponent was fairly active with that bill, speaking on its behalf.” The bill would have allowed faith-based adoption agencies to refuse to place children with same-sex couples.

Harrell has a unique perspective on the bill. She wrote her master’s thesis on faith-based organizations that offer social services.

“That can be a scenario that can work well, but you can’t allow state dollars to be given to those faith-based organizations if they’re allowed to discriminate because there’s only so many dollars allowed,” she said. “So then you’re using a set amount of money that the state has to serve the people of Georgia, and you’re allowing some of that money to not serve people. That just makes no sense.”

“So if churches want to do social services with state money then they have to serve everyone,” she added.

“I do oppose discrimination, but because I supported more foster kids possibly being adopted I was deemed homophobic by many in the gay community,” Millar said.

When asked for further clarification, Millar said, “SB 375 would have allowed a religious organization like Catholic Charities to be true to its beliefs and yet still do adoptions. We now have 15,000 kids in foster care where we used to have 8,000 and I support all options to get a child in a loving environment — that includes gay adoption.”

“This bill was about helping kids, not about being gay or straight. Somehow that got lost by the media,” he added.

Millar also said he opposes people being fired due to their sexual orientation. When asked if that extended to gender identity, Millar didn't directly respond and instead pointed to his friendship with Mike Jacobs, the DeKalb State Court judge who came out as bisexual earlier this year.

“He is a great judge and will get better with experience,” he said. “That answers your question on employment.”