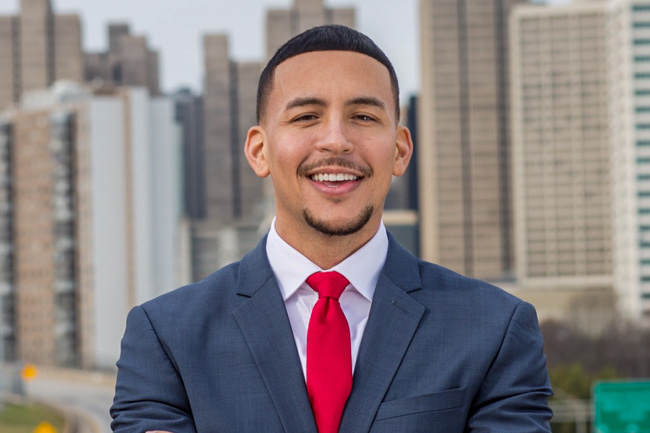 A bisexual business executive emerged from a crowded field of nine candidates to make a runoff election for a vacant Atlanta City Council seat.

Antonio Brown, 34, is likely to face former Atlanta school board member Byron Amos in the April 16 runoff. If he wins, Brown will be the only openly LGBTQ member of the city council.

Only two votes separate Brown (top photo) from third-place finisher Greg Clay – with two provisional ballots outstanding. The Fulton elections chief will certify the election by Friday, after which Clay will request a recount, according to the AJC. The elections chief wants the recount completed by March 25.

“As long as I’ve lived and worked within District 3, I haven’t seen much change for the people and because of that it inspired me to want to be the change agent within our community and bring opportunities and resources back to the residents,” he said.

After launching LVL XIII, Brown started the nonprofit Dream for Humanity, which provides resources and entrepreneurial programs to underrepresented communities.

It’s Brown’s first time running for public office, and he said the decision wasn’t an easy one.

“I grew up a Jehovah’s Witness my whole life, and being brought up in a faith like that you’re taught that politics are corrupt and it’s against the religion to partake in the political process,” he said. “So for me, I stepped outside of my faith because I realized this was a community that was struggling and people felt forgotten about as though their voice didn’t count.”

“They have no real grocery stores that they can go into to give them access to affordable groceries that are health conscious that could bring a new perspective to the community,” Brown said. “The community needs a district-wide resource center that will work on supporting the residents whether that’s on financial literacy or trade programs.”

“I think it’s important that we have development that reinvests back into the community and hires within the community,” he added.

Brown said it’s important to have an LGBTQ person on the Atlanta City Council to be part of the conversation.

Alex Wan was the last openly LGBTQ member of the Atlanta City Council. He lost a bid for City Council president in 2017, leaving the council without an LGBTQ member for the first time in two decades.

Brown received the endorsement of the LGBTQ Victory Fund.

The winner of the District 3 special election will succeed the late Ivory Lee Young.

Amos was accused of sending an anti-transgender mailer during his 2011 campaign for the Atlanta school board. He denied responsibility for the mailer.