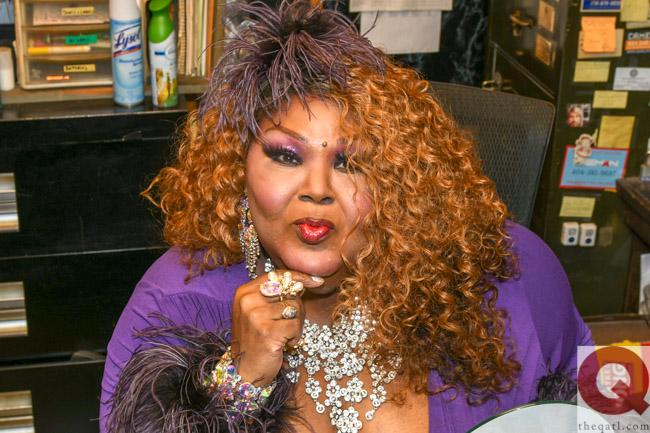 Regina Simms, a longtime mother and mentor to drag queens and transgender entertainers in LGBTQ Atlanta, lost her battle with cancer just four days after her birthday. She was 61.

Simms died on April 26, a little more than a week after she was moved into hospice care in Stockbridge. The Chattanooga, Tenn., native lived in Atlanta since the early 1980s and was a fixture at gay nightlife venues over the decades, including Gallus, Metro and Friends on Ponce.

She spent her last few months living with longtime friend and former entertainer Kely Princeton, who cared for Simms as her health deteriorated. The two met more than 30 years ago as they appeared in shows in LGBTQ bars and clubs.

“She loved everybody. Everybody loved Regina,” Princeton said. “Everybody is going to have their own story about her. She was the most giving person and took care of everybody. She was definitely Mama Regina to many a friend – to all.”

For the last 15 years, Simms was the night manager at Friends. She also oversaw the bar’s New Faces Show, which she used to help identify and cultivate new entertainers.

“She was Mama Regina, that’s what everybody called her,” said Michael Wingo, the bar’s manager. “Everybody talked to her and told their problems to her. She was their mentor.”

Wingo met Simms when she worked as a server at Gallus, a restaurant and cruise bar on Cypress Street in the late 1970s and ‘80s. Later, she moved to the Metro and became a fixture working the door and managing the now-defunct gay bar when it had locations on Cyprus and later Peachtree streets.

Don Hunnewell, owner of the Metro, said Simms could see talent where others couldn’t and coached LGBTQ drag queens and entertainers.

“She was our friend, our sister, our mama and mentor with love that was always present,” Hunnewell said. “Her loving bubbly smile, a nod, or an eye roll communicated everything. She brought out the best in people, and she made our world a better place, and for that we all hurt with loving gratitude.”

Simms introduced Princeton to her future husband at the Metro, one of many memories Princeton has of spending long nights with her at the bar.

“We were working the door, and we were laughing and this guy walks up with a snake around his neck. I had never seen a big girl run that fast. We have those kinds of memories of just crazy stuff,” Princeton said.

Back in those days, Princeton said, Simms was a feisty and energetic performer.

“She was the only big girl that I knew that could do kicks and splits and dance like she was 112 pounds,” Princeton said.

‘She was magnificent in so many ways’

LGBTQ artist Jon Arge worked with Simms at the Metro and quickly became a fan – and friend – and recalls her deep laugh and helping hand.

“Regina took steps to give everyone who wanted it an opportunity to shine as an individual. And she took care to give anyone who needed it, a second chance to redeem themselves. She was a force,” Arge said.

“She was magnificent in so many ways, and it is our collective loss that her light is gone,” he added.

When the Metro closed, Sims moved to Friends to manage the bar and cultivated a cadre of loyal employees. Wingo called her a pioneer who helped bring people into the drag community.

“She definitely cared about the gay community. She worked very hard in her younger years to help get the community where it is nowadays,” he said.

In a 2017 interview with Q magazine, Simms described herself as “introverted” and a fan of low-key and simple times spent with friends. She also enjoyed the diversity of patrons at Friends.

“It’s a melting pot much like the street it’s on, Ponce, and the neighborhood,” Simms said. “I think about all the changes we have fought for, and we have worked to achieve. I see it in the acceptance as the patrons come in and party together and find unity and fun.”

Last fall, Simms’ health issues grew worse, and she took a leave of absence from Friends. Princeton had tried for months to get in touch with Simms but couldn’t reach her. Friends said she was a private person who didn’t easily share details of her health problems.

By Thanksgiving, Simms was admitted to the hospital and was diagnosed with cancer, Princeton said. Since she had trouble navigating the stairs up to her apartment, Princeton opened the doors to her Stockbridge home and set Simms up in the den.

“It was taking a toll on her body, and that’s when she knew something was wrong,” Princeton said.

Princeton had help caring for Simms from home healthcare worker, but her health continued a rapid decline. By mid-April, Simms was moved to a nearby hospice care facility. Throughout her three months with Princeton, she remained in good spirits, Princeton said.

“We laughed and we cried and we reminisced and we laughed even more. Regina was a very very positive person,” she said.

“She never had a bad word to say about anybody. She was happy and then she had her sad moments and we would cry. I would lean across the bed and hold her,” Princeton added.

Friends, which has been closed since March due to the coronavirus pandemic, will host a celebration of life for Simms when the bar reopens. For a few hours, friends will be able to reminisce and share stories about Simms. And then the event will transition to a drag show to raise funds to pay for healthcare expenses.

“It hurts so bad. It feels funny to be here and her not to be here. I had to do everything for her and I miss that. She was my girl, she was family,” Princeton said.