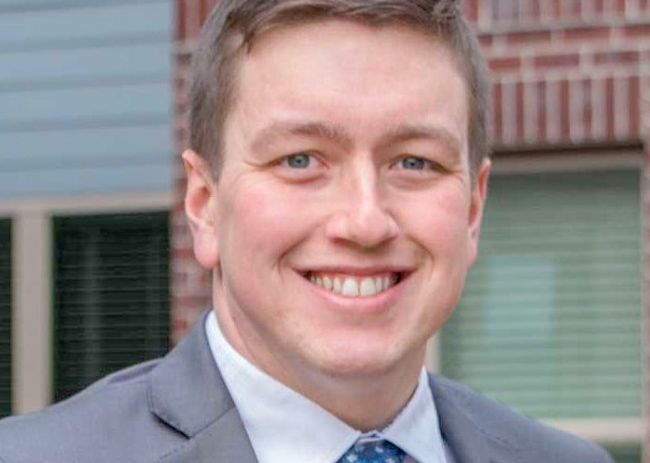 Justin Holsomback wants to ban discrimination against LGBTQ people in housing and public accommodations if he’s elected to the Fulton County Commission in November.

The IT recruiter and Democratic Party activist also wants to make free PrEP available at all Fulton public health facilities to address the county’s high rate of new HIV infections. Holsomback (photo), who is pansexual, would return LGBTQ representation to the commission for the first time since 2017.

“Bringing the LGBTQ perspective is important,” Holsomback told Project Q Atlanta. “What’s important to you is grounded by your experience, and in my opinion, it’s hard for someone to make LGBTQ issues a focus if they don’t have that perspective.”

Holsomback is running for the commission’s District 2 seat, which includes Milton and large parts of Alpharetta, Roswell and Sandy Springs. He jumped into the race in December after the incumbent, Bob Ellis, voted to stop taking grants from the U.S. Department of Housing & Urban Development. Fulton failed to spend $5.4 million in HUD grants over five years, according to the AJC.

“That’s millions of dollars that were going to seniors and first-time homebuyers that can’t qualify for financing,” Holsomback said. “Is that really what we’re doing right now?”

He also wants to plug holes in Fulton’s nondiscrimination policy. The county prohibits discrimination based on sexual orientation and gender identity in employment, but those classes are missing from Fulton’s housing and public accommodations policies.

“Much like with transit, experts have observed that the availability of secure housing and the elimination of barriers of access, whether physical or institutional, are instrumental in unlocking individual success and prosperity,” Holsomback said.

“Homelessness is an epidemic in the LGBTQIA+ community, and ensuring that Fulton County’s Housing Authority and any of its other bodies or boards are actively working to remediate that is a top priority of mine,” he added.

Holsomback came out on National Coming Out Day in 2019, which he feared would affect his political career.

“I was very concerned about what it would mean if I was to run for office,” he said. “I was a 30-year-old millennial who is pretty outspoken on progressive policies, then you just add in being pansexual on top of that. What does that mean to people as a candidate?”

But the experience ended up being “incredibly rewarding,” he said.

“I’ve had a number of people reach out to me saying it’s really cool to vote for somebody that’s loud and proud about who you are,” he said. “There have been negatives since coming out, but close to all the interactions I’ve received have been wholly positive and energizing.”

Georgia Equality and the Victory Fund endorsed Holsomback in the District 2 race. In 2019, he was elected secretary of the Democratic Party of Georgia and served as a Delegation Page for the state delegation to the Democratic National Convention in August.

The last LGBTQ member of the Fulton commission was Joan Garner, who died in 2017.