Citing recent personal struggles and an abiding love for Georgia, one of two declared candidates to become the state’s first LGBTQ lieutenant governor backed out of the race on Monday.

“I love Georgia, but these last few weeks have been rough,” posted Kolbey Gardner on Twitter, alongside a screenshot explaining that his mental health needed to take a front seat to his political ambitions during the upcoming 2022 election cycle.

Hey y’all, mental health issues are real, I’m the sole breadwinner for my family and taking care of elderly family members has taken a toll on my mental health,” he wrote. “I’m telling the world that I suspended my campaign for Lt. Governor.”

The political strategist and first-time candidate, 30, came into the race with up-close experience on some high-profile campaigns. His work included Hillary Clinton’s 2016 presidential campaign and Peter Aman’s 2017 race for Atlanta mayor. He then worked or the Georgia House Democratic Caucus in 2018. He also directed Sarah Riggs Amico’s 2018 run for Georgia lieutenant governor.

“The thing I learned most is you have to go into communities and listen to the issues that matter the most,” Gardner told Project Q in August. “We learned so much about the issues that working class people face every day. We need to care enough to make those policy positions our priority.”

“I believe the role of government is to ensure that people have the ability to achieve their greatest dreams,” he added.

In addition to his work as a consultant, Gardner is also treasurer of the Georgia Democratic Party’s LGBT Caucus.

The candidate was one of four-dozen people named by Joe Biden’s presidential campaign to its Georgia LGBTQ Leadership Council in 2020. He also wrote a book in 2017 about growing up in inner city Cleveland with an abusive parent.

In his prepared statement (screenshot below), Gardner reiterated his love for the state and asked for privacy. Supporter comments included the notion that a public life in Georgia politics would still be available later.

“You prove yourself to be a leader and a winner by being a role model for self-care. ‘Best to you and yours,” wrote one supporter. “The political arena will always be here.”

Project Q reached out to Gardner to see if he wanted to add anything or endorse anyone for lieutenant governor. We will update this post if he responds. 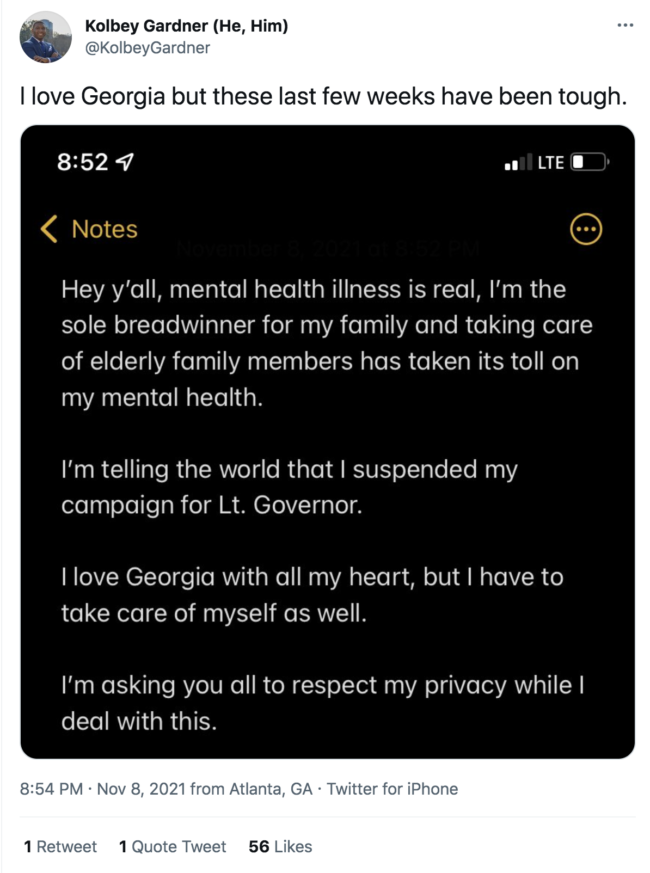